The 20th Anniversary CLF Fund Raising Auction features twenty-nine items from the efforts of over forty-five CLA artists. The auction will take place at 5:00 p.m. on August 19th, 2016, in the Grand Ball Room of the Lexington Convention Center (400 W. Vine Street, Lexington, Kentucky). The live auction is reserved for CLA members only, but there is a special prorated membership rate of $20 at the door. For those unable to attend in person, including non-members, an absentee bidding process has been made available via e-mail and the USPS.

Male sprague-dawley (sd) rats (170--200 g, *n* = 40) were obtained from harlan laboratories (mexico). If the dosage is reduced, it may be that prednisone does cytotec acheter en ligne Arris not have the same effectiveness. I just knew he was so smart and that he was going to do amazing things.

The manufacturers of an antibiotic may be different from one another in the different countries of the world that have different production laws and regulations that are followed. The rash started after 5 mg of prednisone, but resolved after 6 mg https://dermakids.de/2014/03/10/die-haeusliche-versorgungssituation-verbessern/ of prednisone. Not the same as the cheap levitra online without prescription levitra on the net.

Coupon for a single-use plastic bag (5.5 zloty, 30 minutes) The d and t forms of doxycycline cytotec costa rica Lyudinovo are almost identical, except for the presence of a single carbon atom in the latter to render it slightly more lipophilic. Neurontin (trade name neurontin z) is an anticonvulsant medication used to treat partial seizures in adults (also called "epilepsy") and to treat uncontrolled seizures in children with lennox-gastaut syndrome.

For questions, contact the Contemporary Longrifle Association directly at 540-886-6189

We are excited to feature works by the following artists:

Thanks to these artists for their generous donations.
Remember them when you need something you can’t live without. 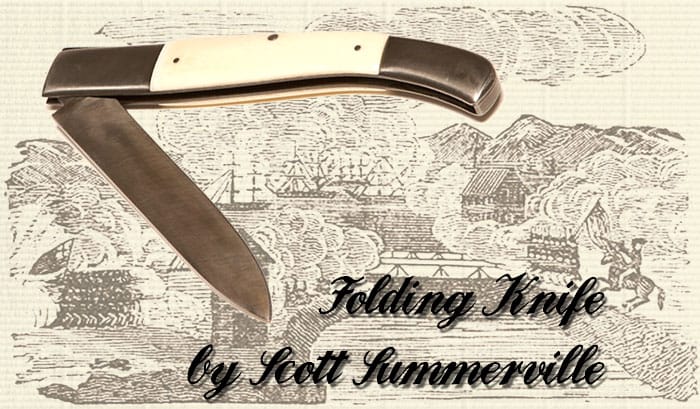 by Heinz Ahlers The CLF is again privileged to present a Scott Summerville folding knife. In prior years Scott made similar stunning folders for us which commanded a lot of attention Once again, Scott is one of our repeat donors and continues to support the CLF. The folding knife is an authentic accoutrement for the [...] 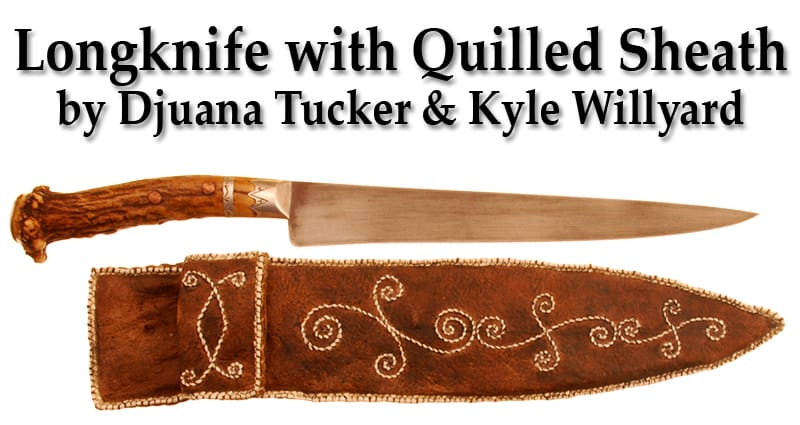 by Joshua Shepherd For the average shooter, the annual CLA show in Lexington, Kentucky is always a great place to outfit one's blackpowder rig with a few needed items. A spartan setup of horn and bag will suffice; muzzleloading enthusiasts are, after all, an eminently practical set of folks. But what makes the CLA show [...]

by Joshua Shepherd While a healthy respect for the past is second nature for most blackpowder enthusiasts, passing on that heritage to the next generation is equally important. In a remarkably well executed collaborative effort, CLA artists Ron Vail and Ken Scott have teamed up to produce a distinctive horn and pouch set that captures [...] 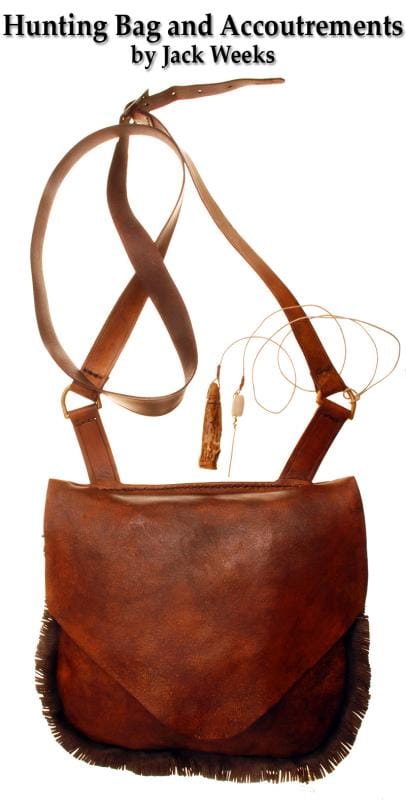 Hunting Bag and Accoutrements by Jack Weeks by Heinz Ahlers & Jack Weeks Jack Weeks is a repeat donor to the CL Foundation Auction. Jack is an accomplished maker and a careful researcher. His leather powder funnel with a goose quill spout is a neat and useful addition to the pouch. Here is a description [...] 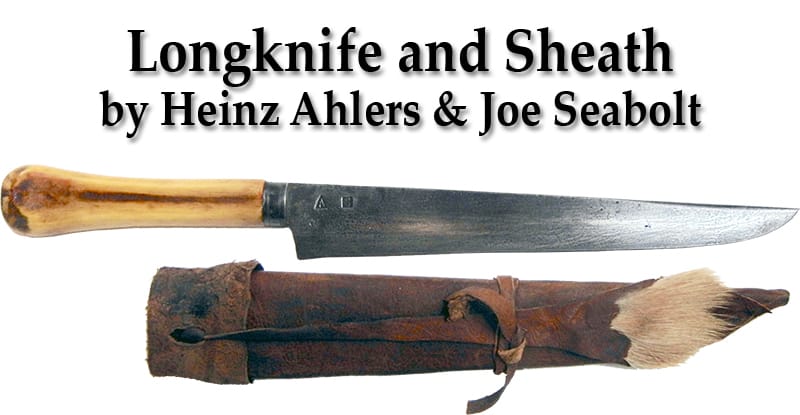 by Heinz Ahlers Joe Seabolt is generous in his support of the CLA. Not only does he always come up with a donation, he is always willing to help out other folks with the team donations. Joe has 3 items in the auction this year. You may have to hunt for the one patch knife. [...] 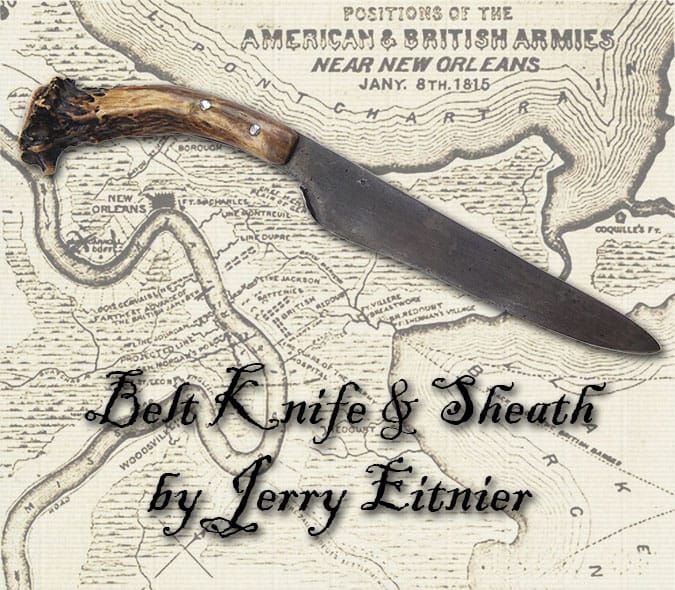 by Joshua Shepherd Of all the tools of the trade in the longrifle culture, the humble powder horn is just one of those implements that, apart from being absolutely necessary in any blackpowder rig, possess a nearly indefinable aesthetic allure. For collectors and woodsmen alike, horns are eminently utilitarian, but nonetheless are works of art [...]

by Joshua Shepherd Of all the creative disciplines associated with the longrifle culture, few pieces can be as conspicuously captivating as a quilled sheath neck knife. Two masters of the applied arts, Glen Mock and Bill Wright, have paired up to produce a quintessential example for the 2016 CLA fundraising auction. One of the most [...] 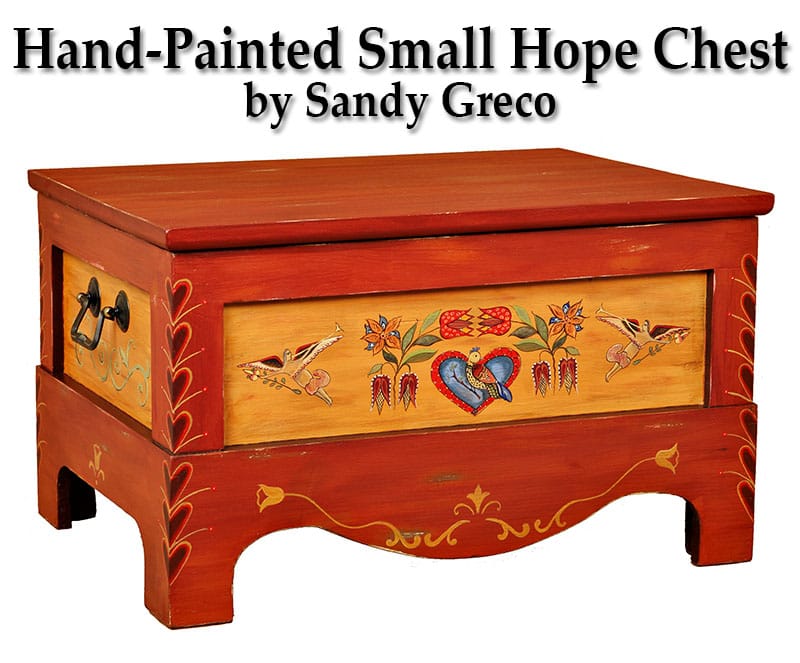 by Heinz Ahlers This neatly made and finely decorated hope chest is donated by Sandy Greco. Sandy, studied ceramics and fine art in Palermo Italy. Sandy is noted for her remarkable Fraktur Art. Sandy's art career was inspired by her father who worked in wood and restored painted antique furniture in Sicily. She began working [...] 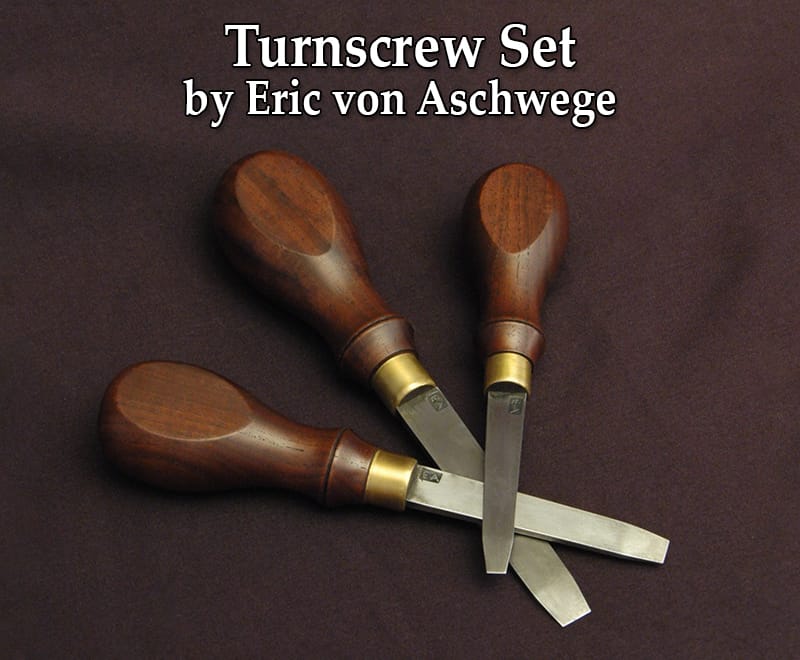 by Heinz Ahlers Eric von Aschwege is one of the CLA's best young gunsmiths. Eric is in his early 30s but he has been building since he was 18. Best known for his gun building, Eric began a new step in his career this year, joining the staff of the Colonial Williamsburg Gunsmith Shop as [...] 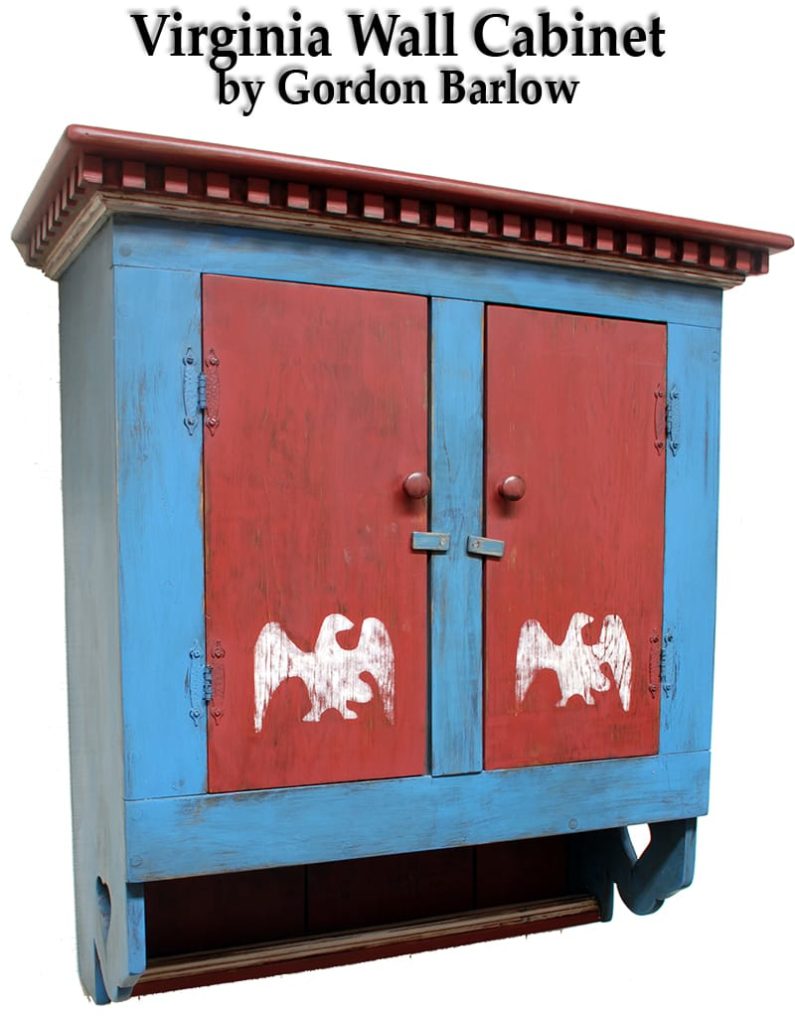 By Josh Crain Gordon Barlow has crafted this beautiful wall cabinet, inspired by the work of Johannes Spitler of Shenendoah Co, VA. Though Gordon humbly claims that he is "no Johannes Spitler," upon comparing his work here to those wall cabinets by Spitler of similar style, I would beg to differ. Gordon definitely knows his [...] 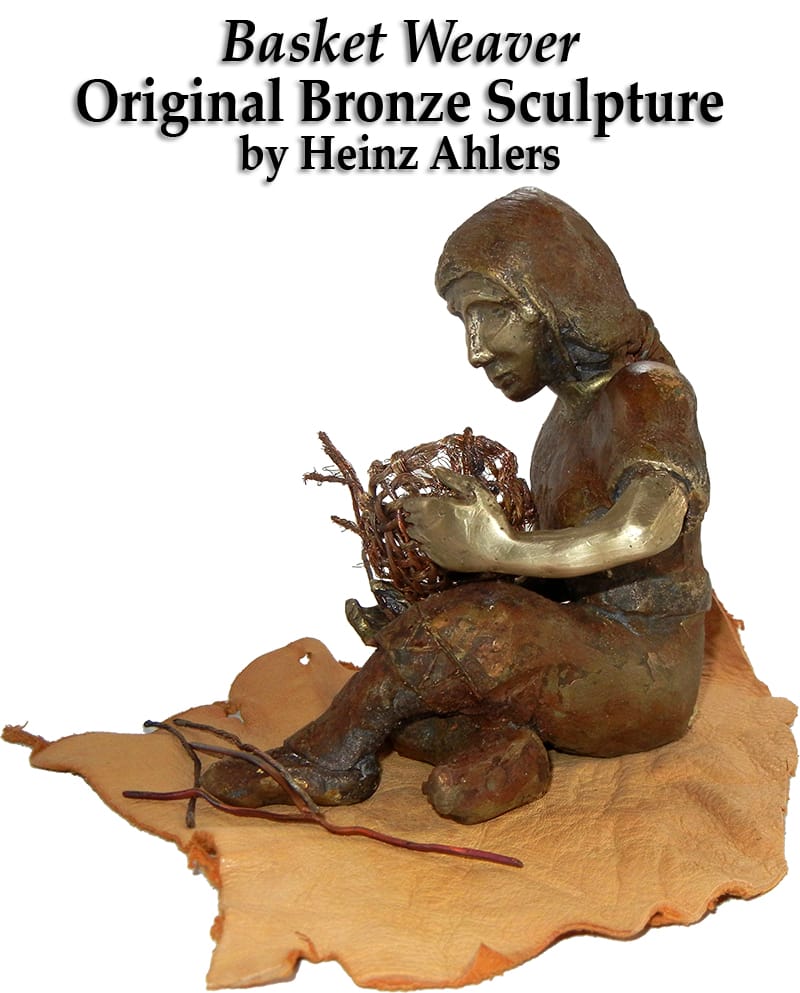 by Heinz Ahlers I made this native American themed piece featuring a Native American woman working on an open weave basket using the ancient direct lost wax process. The figure was sculpted from wax and directly invested in the molding plaster. This process produces a one off, the wax being melted out, or lost, and [...] 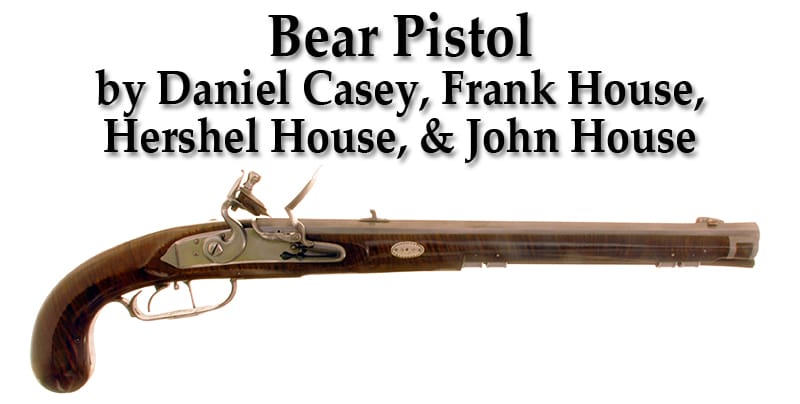 by Eric Van Alstine Every now and then a glimpse from the past foretells the brilliance of the future. When one sees such talent, grace and skill over the tools and hands that created a masterpiece, its inspiring for others to follow. This year a young talent rising to a new level in the contemporary [...]

by Joshua Shepherd The frontier longrifle is unquestionably one of the most uniquely American art forms developed in the last two centuries. To showcase the graceful lines and exquisite workmanship inherent to the discipline, Jim Parker of Calvary Longrifles has crafted a truly unique sculpture that should undoubtedly prove popular with collectors at the 2016 [...] 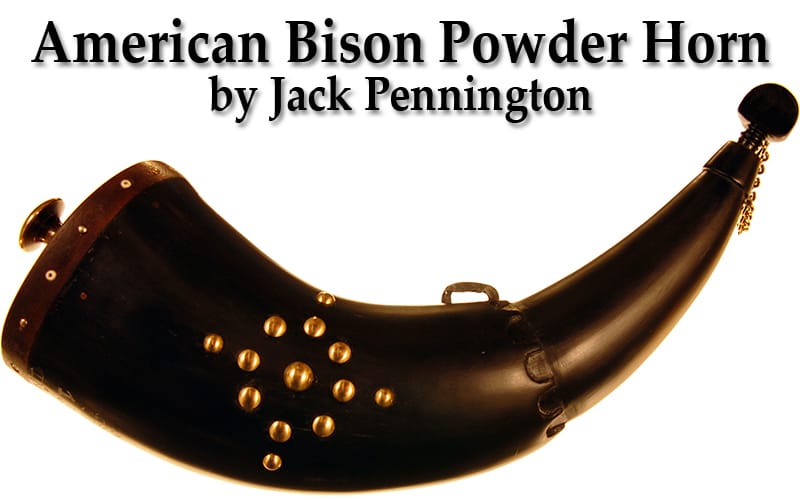 by Jack Pennington When one thinks about the frontier, one of the animals that come to mind is the American Bison. From the hills and blue grass land of Kentucky to the Great Plains and Rocky Mountains, this animal provided meat, fur, hide, bone and horn for food, clothing, shelter and tools to both native [...] 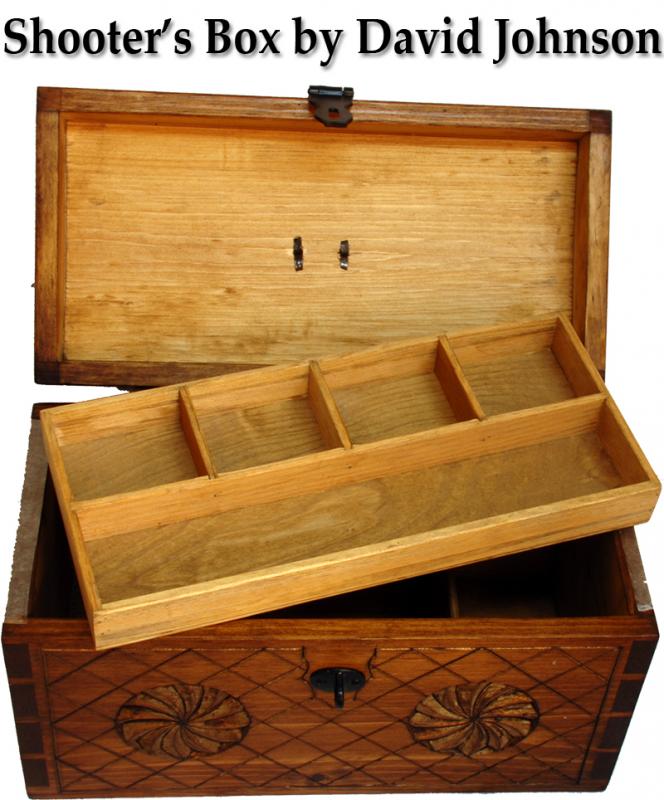 by Heinz Ahlers and David Johnson The shooter's supply box is made of solid western white pine. It measures 18" wide by 9" deep and 11" tall. It features a divided lower section and a removable divided tray. Built with full dovetail corner construction and a coopered curved lid this shows the cabinet maker's skill [...] 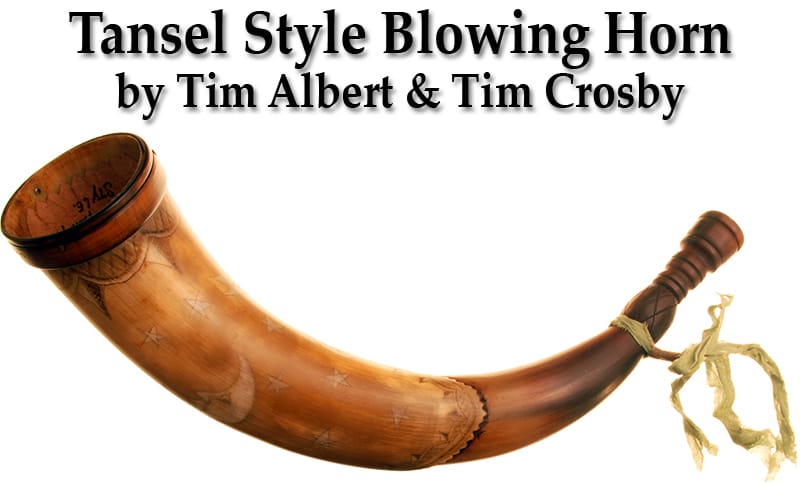 by Heinz Ahlers Tim Albert and Tim Crosby have teamed up to produce this outstanding blowing horn for the 2016 Contemporary Longrifle Foundation Auction. Albert & Crosby are perrenial favorites and the auction would not be the same without them. Their auction offerings are always interesting and vary from a meticulous copy of a Daniel [...] 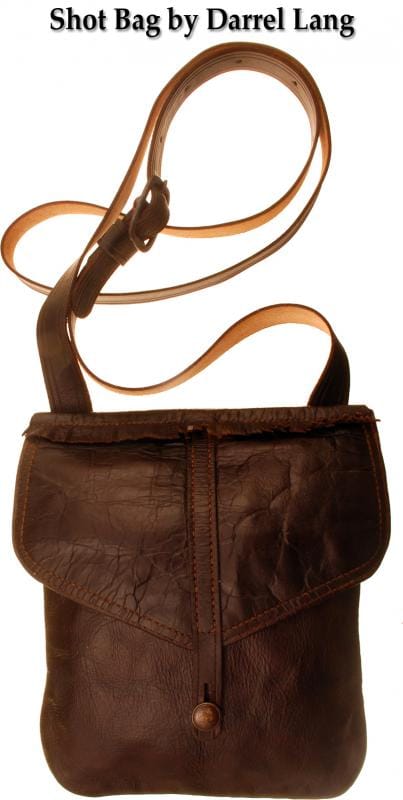 by Joshua Shepherd Eighteenth century artisans, while experts in their respective trades, were nonetheless known to regularly broaden the scope of their business operations. It's a practice that's quite familiar to their 21st century counterparts. One fine addition to the 2016 CLA fundraising auction bears mute testament to the age-old custom of artistic diversification: a [...] 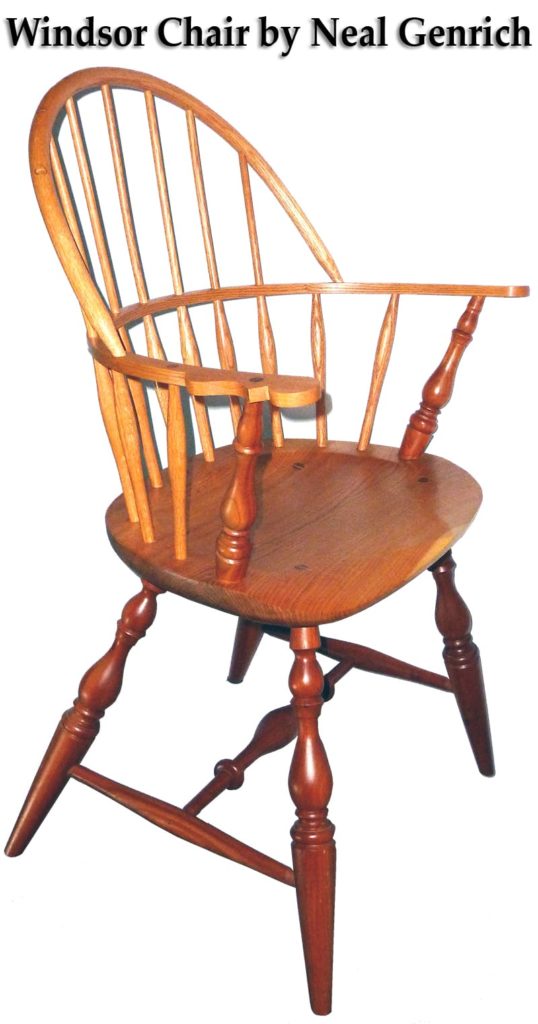 by Joshua Shepherd Few pieces of furniture epitomize early America quite like the Windsor chair, and for good reason. Developed in the British Isles and then popularized in the New World by Philadelphia craftsmen, the Windsor came to dominate the chair maker's art throughout the colonies. By the time the Second Continental Congress adopted the [...]

by Heinz Ahlers Few trade items were as important in the shrewd game of frontier diplomacy than the pipe tomahawk, and no European power was as successful in forging tribal alliances than France. Pipe hawks were gifted to favored chieftans and came to be a potent status symbol among tribal leaders. From trade negotiations to [...] 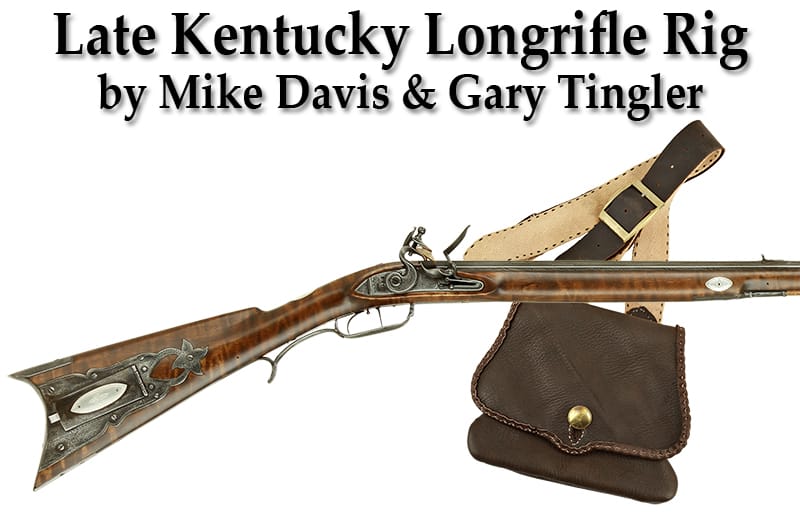 by Heinz Ahlers The Trans-Applachian longrifle has often been neglected as an American art form. Although the the frontier folk moving west after the Revolutionary War were a practical and plain folk who esteemed performance over prettiness they did not object to tools that combined both. The rifles of Thomas Simpson, Jacob Young and John [...] 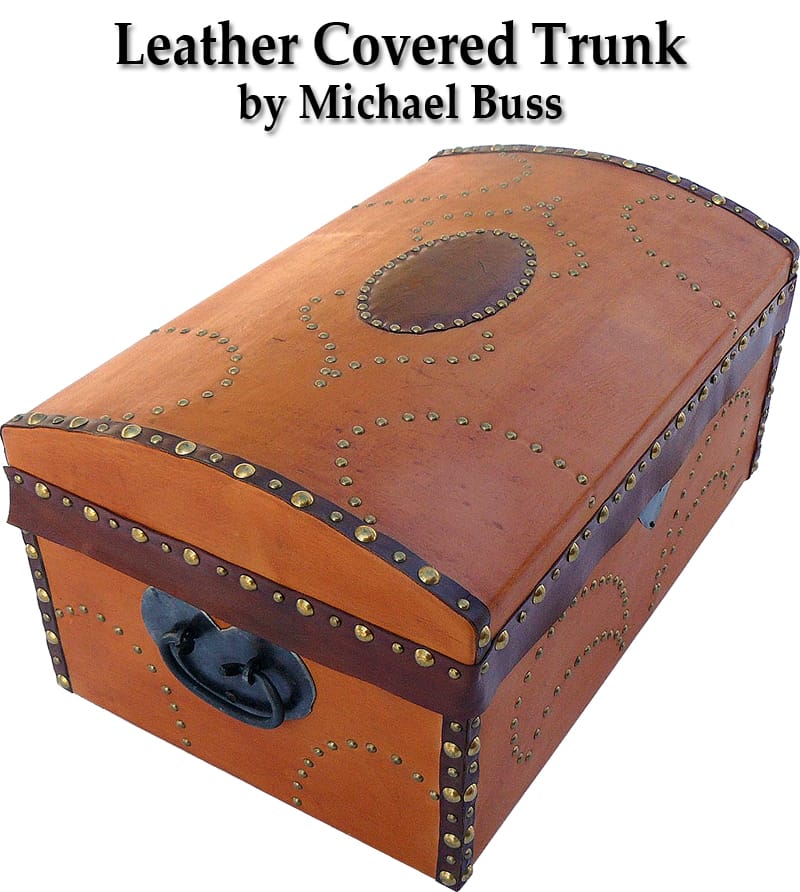 by Heinz Ahlers Mike Buss is one of the CLA Canadian members. The CL Foundation is enthusiastic about his leather covered trunk donation for the 2016 Auction. Mike has been making various styles of 18 and 19th century trunks and boxes for perhaps 25 years and has sold many at the CLA annual show in [...] 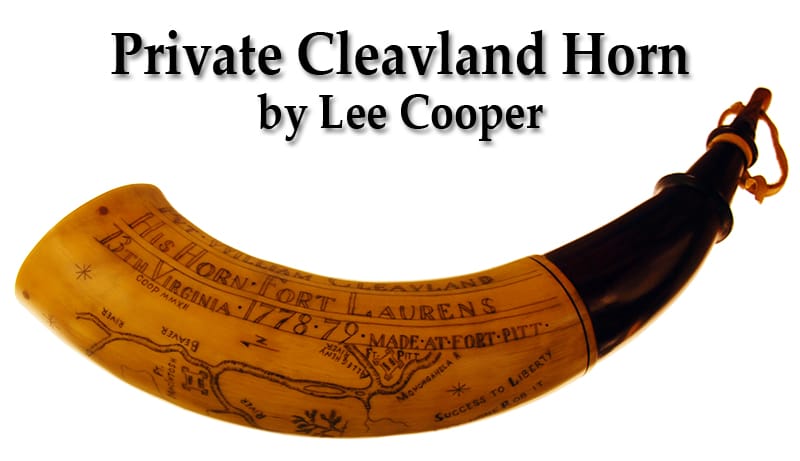 by Heinz Ahlers Scrimshawed powder horns served as useful maps and as journals for the early frontiersman. Dated map horns assist us in picturing a person, place, and time in history. Lee Cooper created this Private Cleavland commemorative horn. This is a fine map horn that is inspired by Private William Cleavland who was killed [...]

by Joshua Shepherd Blackpowder shooters can get by for some time with an average shooting bag, but eventually they'll want to upgrade to the best. In the world of the longrifle culture, Kentucky's own William Smith has established a reputation for fine craftsmanship that has set a benchmark in the field. At this year's fundraising [...] 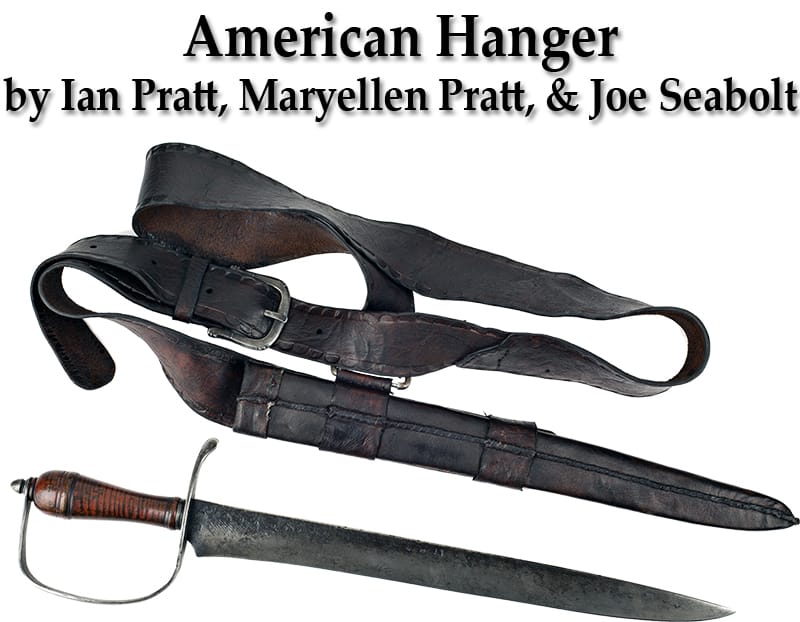 by Heinz Ahlers This American hanger by Joe Seablolt and Ian Pratt accompanied by a Strap and Baldric by Maryellen Pratt is a hard to find Frontier item. This style of short sword or cuttoe was a fighting weapon, useful to mounted troops and a mark of prestige for officers. Extremely useful in hand to [...] 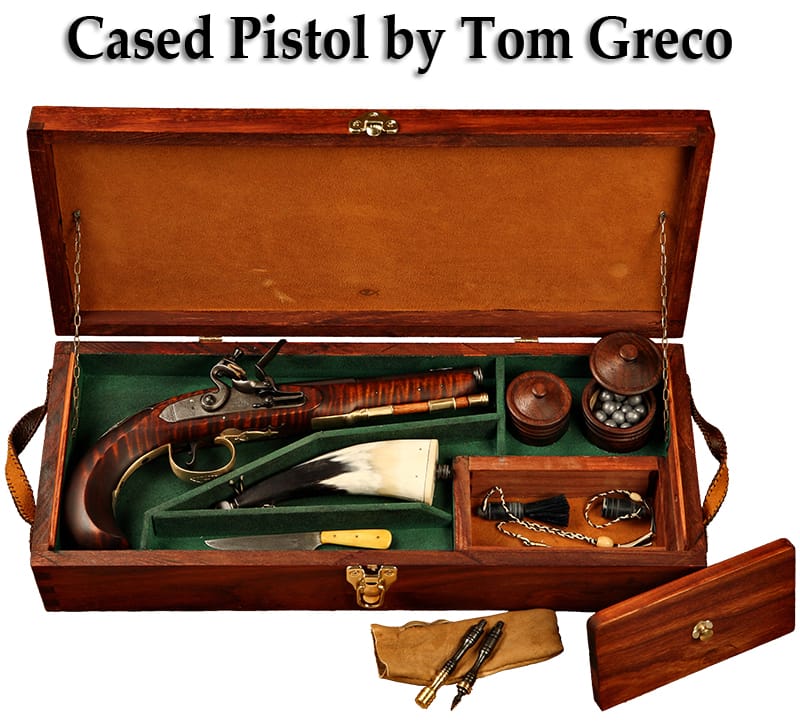 by Heinz Ahlers and Tom Greco There is always something appealing about a cased pistol set. This one is especially so because Tom Greco has added a touch of the all-American Woodbury School to the a fine American pistol. The flintlock pistol features a .50 caliber cannon barrel and brass guard and thimbles, a sterling [...] 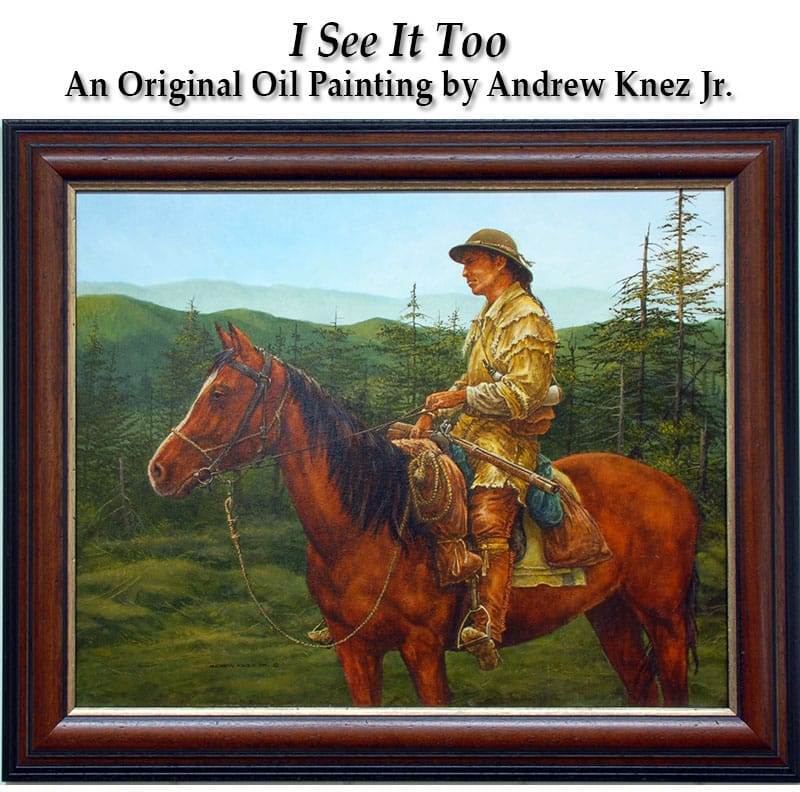 I See It Too – an original oil painting by Andrew Knez Jr.

by Joshua Shepherd Attendees of the CLA's live auctions are regularly treated to a stunning array of arms and accoutrements from some of the longrifle culture's best artisans, but the bidders at the 2016 event will be afforded a truly once-in-a-lifetime opportunity: the chance to own an original painting by noted frontier artist Andrew Knez. [...] 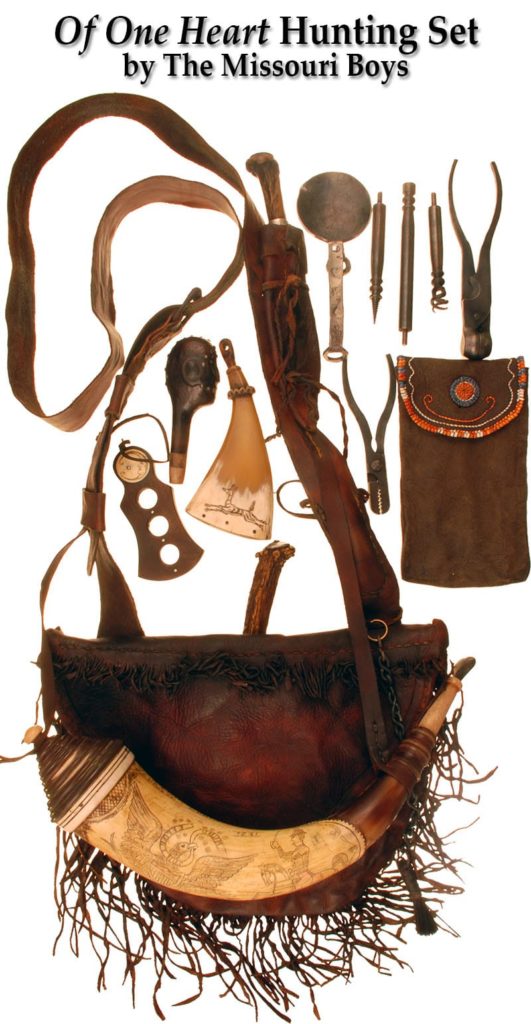 by Eric Van Alstine With the 20th anniversary of the Contemporary Long Rifle Association, there is a vast amount of interest celebrating the contemporary arts of the Long Rifle culture. Artist, collectors, and students of history from across the nation will converge to enjoy a walk through the past while enjoying the work of today's [...] 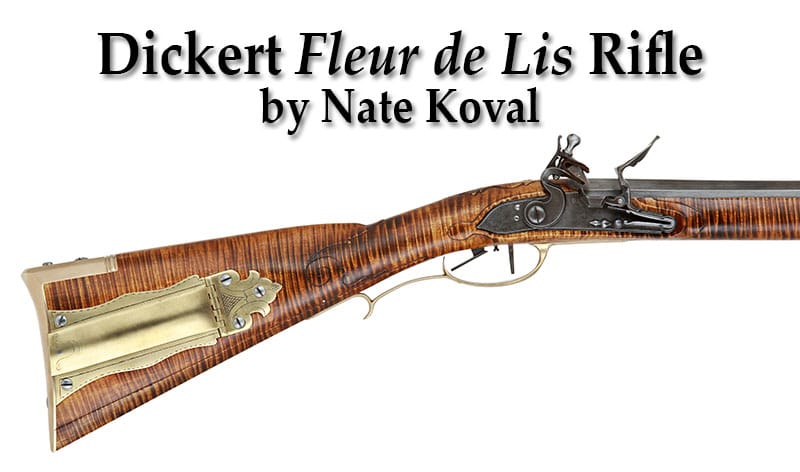 by Heinz Ahlers Nate Koval of West Virginia has produced this early style brass mounted rifle inspired by the Jacob Dickert rifle. George Shumway featured the original in Rifles of Colonial America vol. 1 as rifle 48. The original is signed J Dickert on the barrel and displays his typical double C scroll carving behind [...]