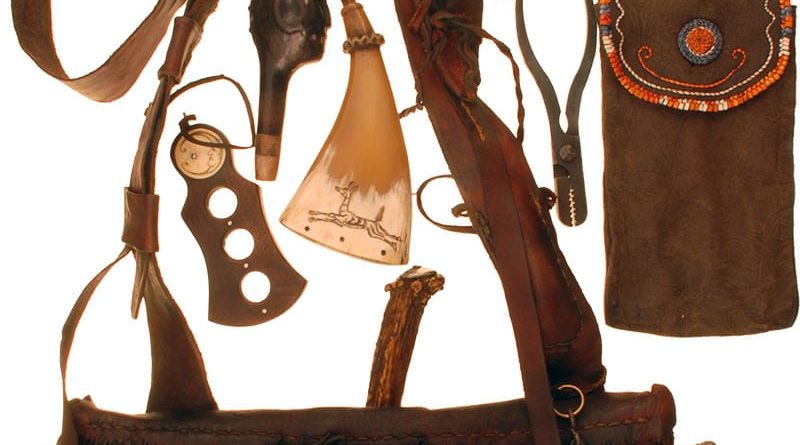 With the 20th anniversary of the Contemporary Long Rifle Association, there is a vast amount of interest celebrating the contemporary arts of the Long Rifle culture. Artist, collectors, and students of history from across the nation will converge to enjoy a walk through the past while enjoying the work of today’s masters while gaining a glimpse of those future artisans for the next generation to follow and learn.

During a phone conversation this past November, 2015 Glen Mock and I were musing about the auction for the 20th anniversary. I asked Mock what he thought about going in with me on a project that would not just be him and I working together but to enlist the talented hands of some other best artist within the CLA, all of which are from the state of Missouri. On the other end a quick moment of silence then in typical Mock can-do-style it was agreed that we give it a try.

Mock called Heinz Ahlers to bridge the idea, and with encouragement that a project of this size completed by one state’s artist is rarely seen, we proceeded on with the scope of the project of what would be included with the entire rig set up. We wanted to get as many involved without bogging down the process. We came up with eight “Missouri Boys” all of which are true artisans in their respected disciplines and how their talents would best fit this project.

Our project needed to have a central horn to work off of, one that would set the tone of the pouch and other accouterments. This task was given to Jeff Bottiger of Edgar Springs, Missouri. You will remember at the 2013 CLA auction where Jeff raised the roof with his rendition of a Tansel style horn, that’s still being talked about today. Jeff came back with another Tansel style horn this year that is sure to whet the appetite of many collectors is without question. This fantastic horn designed in true Bottiger fashion is sure to please. This horn is fully engraved in the study of Tansel family to include a running dog, two running deer, General Harrison on horseback and the main focus is on the prominent Tansel eagle. The base is fully turned, to include an applied ring and turned applied tip.

To follow up with the main horn, the project led us to Harris Maupin of Hillsboro, Missouri. Harris has been creating some of the best engraved French and Indian War horns for many years. We asked Harris to make a small flat priming horn that would go inside the pouch. Once Harris had heard that Jeff chipped in with a Tansel horn, Harris went to work on the priming horn, complimenting Jeff’s work Harris produced a small engrailed flat horn including the running deer on one side and the running Tansel dog on the other. Harris is a wonderful artist, true to form and history. His works of art are centerpieces to any collection, and to have his work included in this set pushes the envelope of such talent.

The next stop was to get some help from Matthew Fennewald from Clarksburg, Missouri. Matthew has a passion for the past, his interests are vast but he has a true gift for Indian and tribal cultures. Matt is well gifted in a deep woodland style and history. Some months ago I seen a war club that Matt created with an Indian effigy head. We had thought about a short starter for our project and I asked Matt if he would recreate the effigy and shrink it down into a short starter. Matt stepped up to the plate with not only the most interesting crafting of a short starter but a compliment to a wonderful woodland set that includes a pick, pan brush, and powder measure as well. As you look at Matthews work you see his own prominent style with a tinge of that Bottiger style in Matt’s work due to the honored opportunity that Matt spent studying with Jeff. The pan brush that is included with this set is of wild Mustang hair from Matthew’s own wild Mustang.

The pouch was hungry for a knife, but with two talented men it was quickly decided that two knives would accompany the Missouri Boy’s project. The first knife would be pouch knife for the back of the pouch. Glen Mock of Mockville, (Mercer) Missouri hammered out a true to form Mock knife with an antler handle, and pewter poured ferrule. Mock’s knife lent some insights to what I wanted the pouch to look like and feel as the back drop of this set.

Though Mock still looks at himself as one of the new guys on the scene, his attributes and experience as a silversmith shines through, and Glen Mock is truly one of the masters of today’s Bladesmiths.

Mock has been tinkering with loading blocks over the last couple of years. On those quiet moments away from the forge Mock puts together some magnificent loading blocks in different shape, sizes, themes and woods. On this particular loading block Mock used the man-in-the-moon theme with scrimshawed ivory and walnut, a small work of art that is to be used and admired.

Our second Bladesmith is none other than Andy Hawkins from Mexico, Missouri. Andy has taken to hammering out blades as if he has done it all his life. His attention to detail, and styling brings about a handsome knife for any pouch or belt. Andy provided the patch knife that hangs on the shoulder strap. This little knife is one hard working knife. Andy and Mock talked a little to see what Mock had put together, leading Andy to follow up with an antler handled knife with a pewter poured ferrule, including a poured wedding band with light engraving to round out his work. Andy Hawkins is one artist you will hear more from as he is growing with back orders for his work.

A pouch is not complete until the accouterments are all in place. The father and son team of Larry and Zac Callahan from Pevely, Missouri made all the accoutrements that any rifleman would need out on the trail or in the woods. Zac quilled up a striking accouterment pouch of brain tan leather all the way down to the quilled button, which is rarely seen in this type of work. Zac’s pouch blends in well with the theme we were trying to bring to this project. His work is graceful and appealing with the right amount of simplicity and refinement to any set.

Larry best known for his accouterments did not disappoint. Larry not only added in a 50 caliber ball mold *, he also worked up a pair of his signature pliers, folding ladle, ball puller, worm, ramrod extension, and a multipurpose tool to complete the set. Larry is the best there is when it comes to accouterments for their rugged and smooth lines that hold up use after use.

The pouch was created by Eric Van Alstine, from Higbee, Missouri. The pouch itself took on its own style as the horns, knives and accouterments came in. I researched many pouches that would do well for our project. The style of the pouch is taken from three period pouches combined to have a refined backwoods styling. I wanted a bold canvas to display the other’s art in a combined yet individual setting. I saw the pouch as a backdrop to the master’s work(s) in the other’s talents. On a personal level I wanted a pouch that looked like it seen trials in its service, I wanted that oily, worn look with rugged ragged look on the cotton material that lined the pouch, the rolling of tired stiff leather and the grace that only age knows how to create.

The five months it took to get the project completed was a journey in itself. The project was not about one single item nor one single artist. Each of these gentlemen have the talent to do well on their own, but it was the coming together as fellow Missourians putting something special together. Not only was this project a celebration of the CLA, but the celebration of friendship in a united cause. The Missouri Boys have had a long tradition of talent, determination and down home styling that not only reflects in their work but their everyday lives.

* Larry Callahan has indicated that if the 50 caliber mold is not the correct size that the purchaser requires, they may exchange it for any other common size at the show.

You can contact The Missouri Boys via email at: