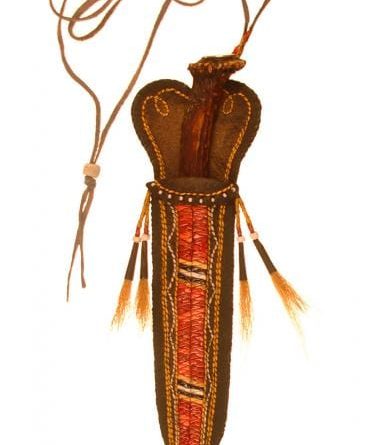 Of all the creative disciplines associated with the longrifle culture, few pieces can be as conspicuously captivating as a quilled sheath neck knife. Two masters of the applied arts, Glen Mock and Bill Wright, have paired up to produce a quintessential example for the 2016 CLA fundraising auction.

One of the most renowned bladesmiths working today, Mock is well versed in traditional techniques that impart an authentic look and feel to his work. Starting with a nondescript blank of 1095 steel, Mock has fashioned a richly patinated archetype of an antler-hafted frontier knife. Although he’s regarded as one of the most skilled artists working in today’s muzzleloading community, Mock is known for crafting knives that are far more than collector’s pieces. This is a working blade equally at home in a display case or in the field.

Artist Bill Wright contributed a classic quilled sheath to this project. Made from smoked brain tan deer hide, the sheath is dyed in walnut hulls and adorned with porcupine quillwork in a traditional Eastern Woodlands tribal motif. The piece is further embellished with quill-wrapped deer hair tassels. Wright has succeeded handily in creating a sheath that meets the criterion of his artistic objectives. It’s his goal when creating a piece, he explains, “to make it look authentic, used, and worn… in other words, like a piece from the past.”

A respect for that past is a driving force behind the work of these gifted craftsmen. Wright has been a CLA member for over a decade and faithfully contributes to the annual fundraising auction. For his part, Mock says, “I donate because I want to do all I can to support our organization… I believe the CLA is a great organization that is keeping the love of our history alive and bringing out the talent of so many artists.”

Glen Mock can be contacted via email at mock@grm.net.

Bill Wright can be contacted via email at wrightsgarden@hotmail.com.