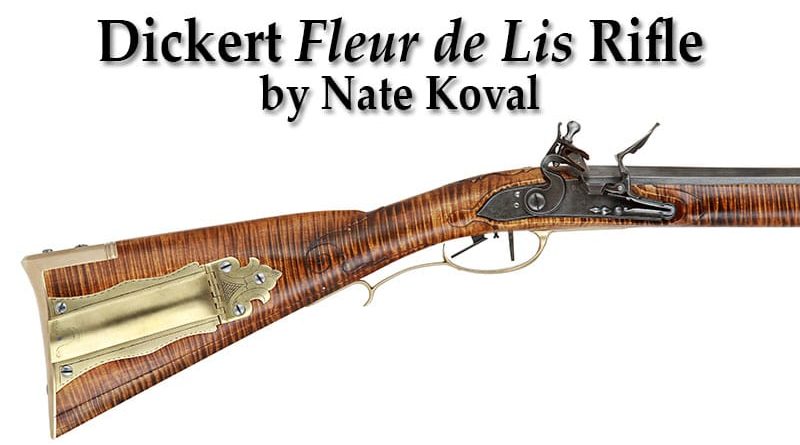 Nate Koval of West Virginia has produced this early style brass mounted rifle inspired by the Jacob Dickert rifle. George Shumway featured the original in Rifles of Colonial America vol. 1 as rifle 48. The original is signed J Dickert on the barrel and displays his typical double C scroll carving behind the cheek piece.

The rifle has definite pre-revoluntionary rifle style with classic simple raised carving, beautifully executed by Dickert and by Koval. The Fluer de Lis box finial, that distinguishes the rifle, is early in style and not typical of Dickerts later Lancaster style. It is more like Lehigh vally and Berks County

Nate does a splendid interpretation of this rifle. Nate married a 52 caliber swamped Ed Rayl barrel with a Wayne Dunlap hard maple grade 7 stock. The modified box from Jim Chambers mirrors the original Dickert box and Davis Jaeger trigger fits the original look. Nate started with a Chambers gunmakers flintlock to capture the look and lines of the originals European Germanic styled lock.

This is a rifle of the early Pennsylvania wilderness, when Fort Pitt was still a distant bastion at the far edge of the Colonies and Shawnee, Mingoes, and Iroquois ruled the Ohio Valley. This is a wonderful traditional brass mounted rifle from and up and coming CLA gunsmith. Breakout your volume one of Rifles of Colonial America and compare the pictures here with the original. You will not find a better pre-revoluntionary war styled rifle than this one.

Nate Koval grew up in Bethlehem Pennsylvania and got his start in rifle building from Greg and Chuck Dixon. In addition to the Dixons, Nate credits Don Getz, John Getz, and Frank House with encouraging and mentoring him in his rifle building. Nate says he is glad to be able to support the CLA through this donation.

Nate Koval can be contacted via email at njk686@yahoo.com