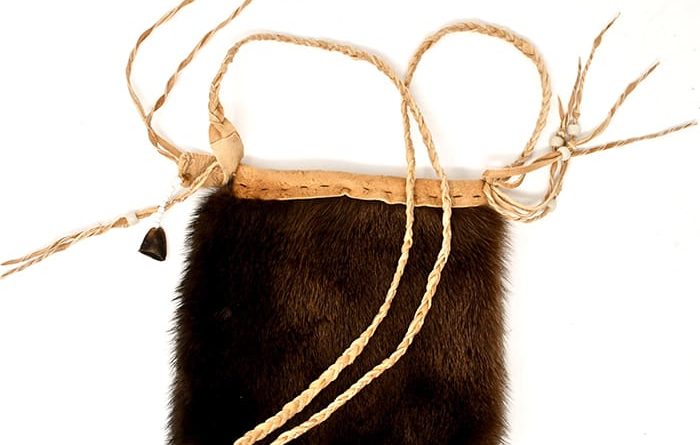 The Otter skin pouch is traditional Native American accoutrement. Franklin Chambers has created a particularly fine example for this years auction. James Adair made the following observation relating to Native American hunting pouches: “all the savages sit cross-legged, so my visitors did, and held their guns on their knee, or kept them very near, with their otter-skin shot pouch over one of their shoulders.

This nicely tanned otter pouch has the open top construction popular with the Southern Nations. A woven shoulder strap in soft buckskin with a dew claw decoration compliments the pouch. The dark otter fur has a striking appearance. Franklin notes the Otter bag is used in the Southern Nations especially the Quahla Or Eastern Tsalagi Cherokee, in which my father was an enrolled member; my mother was Mohawk Nation Akwesasne. I don’t know of extensive use by Northern Woodland Nations, not to say that it wouldn’t have been traded for.

Franklin Chambers has worked on traditional Eastern Woodland style bags for approximately 15 years, His background is in Historical Education and Anthropology. Franklin has been a volunteer for the Conrad Weiser homestead and Daniel Boone homestead for 6 years as a Woodland Iroquoian interpreter and also volunteered at The Iron Hill Museum in Southern Delaware. He is a new auction donor and we hope to see more of his work in the future

This is an excellent recreation of authentic period accoutrement, a great addition to any eastern Native American collection or historic interpreters gear. These otter skin pouches do not come on the market often. This is your chance to own an excellent example.