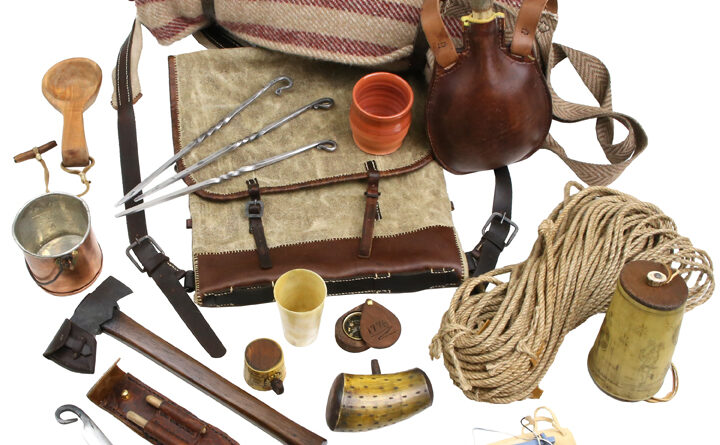 At its core, the Contemporary Longrifle Association is a community of collaborative artists who share an enthusiasm for early American heritage. For this year’s fundraising auction, Shelly Gier organized an effort by a score of CLA artists to produce “The Scout Set”, a truly remarkable collection of practical tools for the modern frontiersman.

The Scout Set is built around a superb knapsack crafted by artist Shelly Gier. Gier refined the design of the pack after spending countless hours during backcountry treks. “I researched many different styles of packs,” she explains, and “ended up taking individual features from several styles and morphed them into one.” The finished product is an attractive but utilitarian pack that will make life in the backcountry much easier for the practical outdoorsman.

The body of the knapsack is crafted from period-appropriate hemp fabric which is treated with beeswax and deer tallow for water resistance. Leather welts protect the side seams, and there are four rings sewn in the seams on each side. The base of the knapsack is reinforced with oak tanned leather treated with bear oil. Both the top and bottom of the pack sport two tabs for securing additional gear. The pack also boasts two additional pockets: one positioned inside the flap for smaller items, another on the front, which is integrated into the seams.

No 18th century scout would dare to venture into the wilderness without a tomahawk. For this set, noted blacksmith Benjamin Hoffman has contributed one of his renowned belt axes. The design is based on an original piece dating from 1770-1812 that was found in Ohio. Hoffman hand-forged the head from 1070 tool steel, and hewed the handle from a hickory blank. Hoffman’s belt axes are honed sharp, and this piece comes complete with a custom sheath hand crafted by Hoffman out of oak tanned cow hide.

For a good blade, you’ll do little better than to own the knife in this set created by artist Tony Chase. A member of the American Mountain Men, Chase is more than familiar with the features than render a knife reliable for actual use in the backcountry. This razor-sharp blade was created from 1080 steel and fitted with bone scales, and is ideally sized for an all-purpose knife around camp. The knife is paired with a custom belt sheath by Mike Conkling. Conkling crafted the sheath from horse butt strip, which exhibits a rich vegetable tanned russet color. The sheath’s welted seam was sewn with waxed linen thread, and the entire sheath was given a protective coating of neatsfoot and mink oil.

Whether you’re headed to the backcountry for a short hike or an extended trek, it’s a good idea to pack basic fishing gear. Historian and reenactor Matt Wulff contributed a fishing rig based on cod winders common in the 18th century. Wulff’s hand winder was made from hardwoods and entirely assembled with the use of hand tools. The fishing line is period-appropriate hemp, and the hook is a hand forged “spade” type. A simple cork bobber and hardwood peg make it adjustable for depth, and split buckshot serves as a weight. The winder is finished with colonial blue milk paint.

For keeping your bearings in rugged country, Joe D Baxter has donated a compass that fits nicely in an 18th century pack. The brass-rimmed compass is nestled in a pine body handcrafted by Baxter. The swiveling lid to the case also displays a simple but appropriate carving: “1776.”

When you’re ready to bed down for the night, the scout set includes a warm and hard-wearing blanket by Minnesota weaver Carrie Jessen. “I am drawn to the patterns, colors, and fibers used in our early colonial period,” explains Jessen, “now, I’ve learned to appreciate their properties that make them valuable today, such as warmth, durability, and sustainability.” This heirloom-quality piece is a two panel center seam wool blanket, handwoven on a four harness loom in a straight twill pattern.  It is heavy weight; colors are russet and tan striped and it is 68” x 79”. The seam and hem stitching was done with linen.

Jessen’s blanket is accompanied with vegetable tanned leather straps by Jeff Luke. The blanket straps, which have hand forged iron buckles by Jeff Rader, were designed with a connecting strap that also doubles as a carrying handle. For carrying additional loads on the trail, Luke also constructed a tumpline. The head strap for the tumpline is constructed of cowhide, with tooled accent lines and forged rings on each end, while the strap ends are 4-5oz cowhide dyed in walnut hulls.

The scout set also includes the camp necessity of a fire making kit. Barbara Smith crafted the tinder box/fire starter container from horn, with a maple base plug and lid. The lid is fitted with an antler knob and has a twisted, brain tanned leather thong to keep the lid attached to the container. The kit contains all the necessities for fire starting, including a steel striker, flint, a tin of char cloth, flax tow, and a small beeswax candle. The surface of the horn container is adorned with attractive scrimshaw designs including the sun, moon, an owl, a compass, and two Native Americans by a fire. The artist used dyes and walnut stain to add a rich patina to the horn and highlight the intricate scrimshaw designs.

For securing your gear or setting up camp, the pack also comes with authentic 18th century rope by Darrell Brandenburg. Brandenburg’s cordage is legendary in the reenactment community for strength and reliability. Made entirely by hand and roughly 25 feet long, the ropes are crafted from jute and then fire treated, rendering them less prone to stretching and resistant to rot.

Travis Bauer contributed a truly unique item to the Scout Set: a miniature drawknife. This diminutive workhorse is hand forged out of 1084 carbon steel and is the perfect companion for trekking. The piece is ideally suited for a variety of tasks around camp, such as sharpening stakes for shelters or for cooking use around the campfire. The back side of the high-carbon blade can also be used as a flint striker for fire making.

If you’re thirsty after a long day on the trail, the Scout Set has what you need. Bob Browder’s canteen is a masterful example of the leatherworker’s art. This colonial-era beauty is fully watertight and, attached to a woven strap, is ready for the trail. Rob Park contributed a rugged noggin, hand-carved from hard maple and finished with ten coats of mineral oil. Linda Pritchard donated a fine example of one of her reproduction redware mugs. The pack also includes a horn cup by Jeff Gier which was painstakingly crafted with methods straight from the 18th century. After shaping, the body and bottom of the cup were heat fitted, assuring a watertight seal. The cup was then treated with melted beeswax.

If a beverage a little harder than water is more to your liking, loyal auction donor Jerry Eitnier has contributed a rum horn to the scout set. This small section of horn, which carries an attractive primitive scrimshaw design, is fitted with pine plugs and a hickory stopper and ready to hold the ardent spirit of your choice.

For an evening’s meal by the campfire, Todd Butler’s skewer set will prove invaluable. Butler’s set includes three hand forged skewers which can be used as a tripod or cook set.  Each skewer is 18” long with a twist and interlocking ring. Troy Sowers’ copper boiler can serve as beautiful period home décor in your kitchen, but will also hold your evening meal in camp. For seasoning your victuals, Master Horner Carl Dumke has included a horn salter which he explains represents “the remnant of a French and Indian War powder horn that was broken and repurposed.  It is engraved in the theme of that period.” The piece is an original design, but exudes history: the horn’s wooden plugs are crafted from salvaged 300-year-old pine.

For more information on the work of the artists, contact them directly: