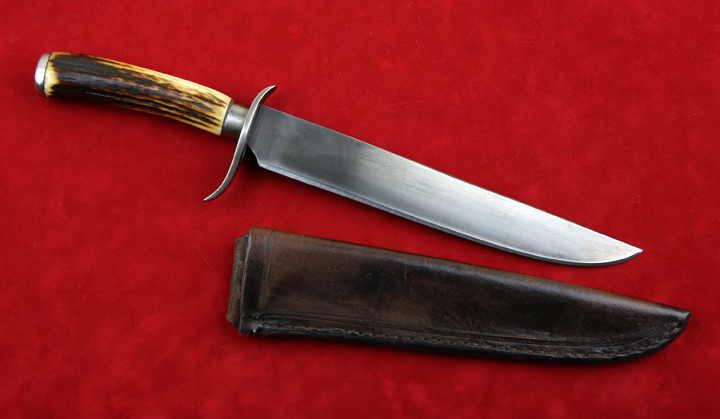 Collectors of fine knives just can’t seem to acquire too many blades, but it’s a rare thing indeed for a knife to perfectly blend artistic aesthetics with rugged functionality. At this year’s CLF fundraising auction, bidders will have the opportunity to purchase a collector’s grade knife that’s worthy of display in the home or office, but will also perform flawlessly in the field.

Alabama artist Todd Butler’s offering at this year’s event is a large sized rifleman’s knife with a profile resembling the classic Bowie. This glistening blade was hand forged from 5160 steel and married to a stag handle with an iron s guard and iron end cap. The knife is accompanied with a custom made, heavy weight leather sheath.

Subsequent to a career of nearly thirty years with the United States Marine Corps, artist Todd Butler tackled the traditional art of blacksmithing, studying with fellow craftsmen including Ian Pratt, Joe Seabolt, the House brothers, and Rich McDonald. This auction offering affords bidders the chance to own an exquisitely-made knife from one of the CLA’s most gifted emerging bladesmiths.

For more information on the work of Todd Butler, contact the artist directly:
capallmaraforge@gmail.com