Saga of the Longknife 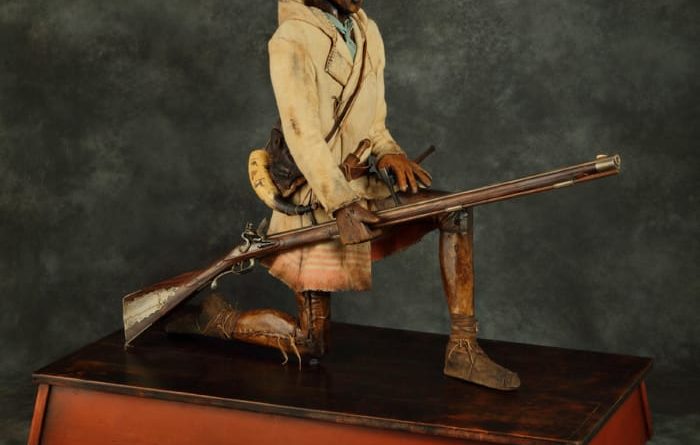 Saga of the Longknife

One of the keystone offerings of this years CLF fundraising auction is the collective creation of eight CLA member artists. Christened the Saga of the Longknife by its creators, this piece constitutes a stunning, mixed media sculptural set composed of superbly executed, functional art.

The entire set is created around a folk-art carving by artist Matt Fennewald, who used a mix of woods including pecan, walnut, and cherry to assemble the body of the sculpture, which is scaled to the size of a young frontiersman. Affectionately nicknamed Wilbur by his creator, the carving was given a hand-rubbed finish of wax, tar, and shellac.

The rifle which accompanies the Saga of the Longknife set was created by gunsmith Josh Wrightsman. Although this rifle is loosely based on original Virginia guns, Wrightsman imparted the finished piece with his own artistic sensibilities. Built around a .40 caliber, 34″ Rice B-weight barrel, this rifle is stocked in walnut and fitted with a Chambers Queen Anne lock. The iron furniture was entirely hand-forged, and beautifully contrasts the richly-finished walnut stock. For a gun builder, Wrightsman was tasked with a difficult balancing act. “The most difficult part about this gun,” he explains, “was that it needed to be a certain size: small enough to fit a 6-year-old, but simultaneously suitable for a grown man.” “I wanted a gun,” says Wrightsman, “that the new owner would want to use every time they went shooting.”
Todd Daggett created the Saga knife, hand forging the blade from an antique buckboard seat spring. The antler handle sports a cast pewter bolster. For optimum strength, the tang is peened over an iron washer as well as pinned. The knife is accompanied with a sturdy sheath crafted from buff hide scraps, hand-stitched with whitetail sinew, and the tip is decorated with antique brass tacks.

Simeon England hand forged the hammer-polled tomahawk based on original eighteenth century examples. It displays whiting and polishing of a gunsmith or whitesmith, explains England, and carries file work and facets reflective of original colonial examples. The head of the tomahawk was hand forged out of mild steel, and features a forge-welded, high-carbon steel bit. The handle is made from beautifully patterned curly ash, stained with nitric acid.
Eric Ewing assembled an exceptional shot pouch using a wide array of materials. The bag and strap is made from a mix of skins including bark-tanned groundhog, alum-tanned groundhog, brain-tanned deer, and vegetable-tanned cowhide. Ewing utilized his own homemade concoctions to give this piece a well-aged patina.

Wilburs powder horn was created by Tad Frei, who describes the piece as a fancy common man’s horn. Crafted from a small cow horn, Freis piece features charming folk art scrimshaw that reflects a bit more aesthetic concern than we typically see on utilitarian accoutrements Fitted with a pine base plug and a tapered spout, Freis diminutive horn is appropriately scaled to the Saga set but remains fully functional.

The carving is dressed in period-appropriate garb also crafted by Matt Fennewald. Wilbur is dressed in a wool blanket coat, rawhide leggings, and brain-tanned garters. His footwear consists of a set of pucker toe moccasins made by Alec Fourman, who utilized brain-tanned, smoked, and aged deerskin.

The entire Saga set is topped off by a quintessential broad-brimmed frontiersmans hat by Michael Agee. The hat is round blocked fur felt. Hagee custom made the lathe-turned block, which, he explains, was done to nearly all hats prior to 1820. Agee added splash of color with a hat band, which was made from red wool stroud. The hats inner lining is made of hand stitched linen, which was then stamped with a period style maker’s mark.