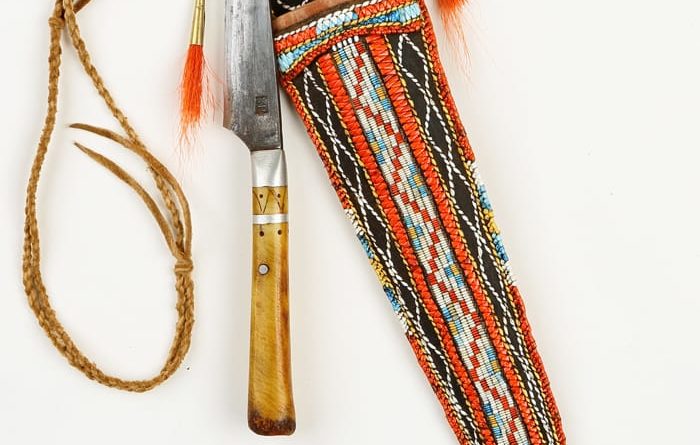 During the Seven Years War, French military engineer Pierre Pouchot was intrigued by Native American warriors who habitually wore remarkably decorated knife sheaths as a badge of status. The Indians always have one suspended round their neck, explained Pouchot. Their knife is hung from the neck, he wrote, and falls upon the breastthey regard this property as sacred as their children.

Attendees at this years CLF fundraising auction will have the opportunity to acquire a truly outstanding neck knife and sheath by artists Virgil Henle and Christie Suchora. Henles knife is a quintessential frontier standard. Hand forged from 1084 steel, the blade is fixed in the leg bone of a young whitetail. The handle is embellished with a decorative ring and end cap of hand-cast pewter, and the artist imparted the bone with an appealing aged patina. Henle handily succeeded in crafting a pleasing but resilient knife thats ready for work.

The knife is paired with an exceptional quilled neck knife sheath by artist Christie Suchora. The body of the sheath was constructed from brain-tanned deerskin. Suchoras husband John prepared the hide with a traditional dry scrape method, then heavily smoked the leather to a rich burnt umber hue. The sheath features an inner protective lining of Minnesota birchbark.

Adorning the face of the sheath is Suchoras quillwork, which can be described as nothing short of a masterpiece of traditional tribal art. Based on an original 18th century example in the collection of Londons British Museum, the sheaths breathtaking loomed panel features quills colored with period-appropriate dyes, including madder root, sumac, osage orange, and indigo.

The artistic duo of Henle and Suchora has teamed up to produce a stunning work of art thats destined to become a multi-generational heirloom. The CLA is amazing, says Henle, the annual show is a great place to see old friends and buy handmade items and see original pieces. But more importantly, the organization is crucial to preserving traditional skills that might otherwise be lost.