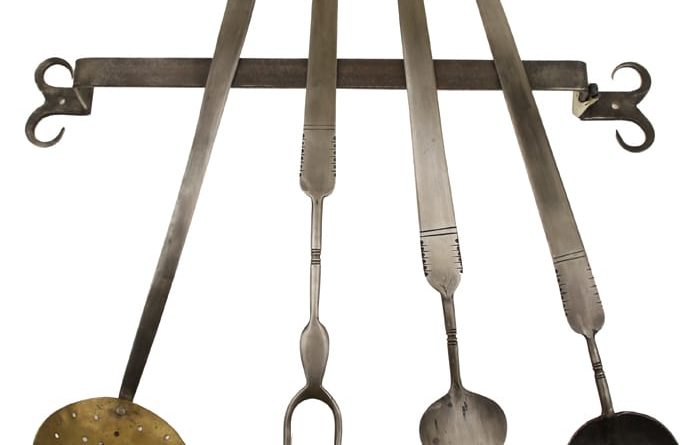 For many early American history enthusiasts, living with a tangible connection to the past can be a way of life. This years CLF fundraising auction will feature a delightful set of cooking utensils that will be equally at home around a campfire or in a 21st century kitchen.

Blacksmith and CLA member Greg Bray has crafted a full set of hand-forged cooking implements based on original 18th century examples. The set includes a ladle, a serving or cooking fork, a key hole spatula, and a skimmer. All the tools were forged from mild steel and the skimmer has a brass bowl attached with rivets. The hanging bar for the set is adorned with rams horn finials. True to the example of most 18th century blacksmiths, Bray left these pieces unsigned.

The artists experience at the forge is evident in this fine set, which is attractive as well as utilitarian. Bray has been blacksmithing for nearly three decades, and now serves as the executive director of Pricketts Fort, a West Virginia living history museum that recreates life on the early frontier.

For more information on the work of Greg Bray, contact the artist directly at: director@prickettsfort.org