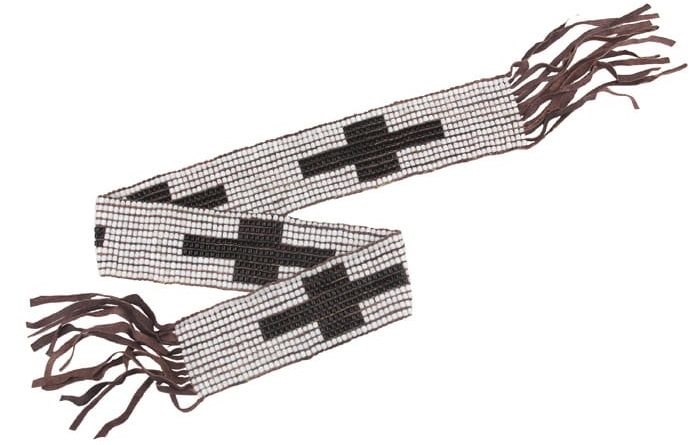 In September of 1736, nineteen chiefs from the Six Nations the Iroquois Confederacy arrived at Philadelphia to strengthen the “covenant chain”, or traditional alliance, with British officials in Pennsylvania. When Kanickhungo, the chieftan who spoke on behalf of the Seneca tribe, rose to speak, he expressed “Satisfaction in the friendly and good Disposition of you our Brethren, towards all the Indians of the Six Nations.” As a record of his words and a testament of his own forthrightness, the sachem then presented Pennsylvania officials with a wampum belt “of white Wampum of eleven Rows, with four black St. George’s Crosses on it.” In the delicate game of frontier diplomacy, the belt was a powerful symbol of good faith.

This offering of the 2017 CLA auction presents a unique opportunity for bidders to obtain a museum-quality piece. Wampum belts are visually stunning works of art and the reproduction of this belt was in good hands. The artist has been making wampum belts, and studying the history behind it all, for nearly a decade and a half. “Beadwork has been something I’ve always enjoyed,” says Bowles, “and I’ve had a blast weaving wampum as it combines the original native materials and European goods into permanent records of their talks.”

The donation of this exceptional piece is the artist’s way of assisting the organization which is at the heart of the longrifle culture. Bowles’ experience with the CLA has been nothing but positive. “So far,” he says, “I have found everyone to be fantastic people.”