Rifle, Pouch, and Knife by Josh Wrightsman and Gary Tingler 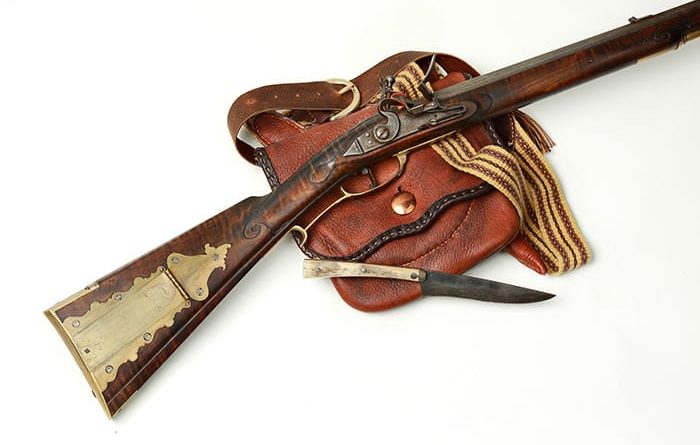 Rifle, Pouch, and Knife by Josh Wrightsman and Gary Tingler

by Heinz Ahlers and Josh Wrightsman with photography by Ric Lambert

The pre-revolutionary frontier, west of the great wagon road was an exciting place, from the Allegheny River country down through western Virginia and the Carolinas. The Frontiersman were learning their trade and the skills that would take them across the continent. One of their primary tools was the American longrifle and one of the cradles of longrifle development was Lancaster, Pennsylvania.

Josh Wrightsmant and Gary Tingler have created an early frontier rifle and hunting bag with knife for the auction. The rifle is an early Lancaster, late transition style, with a 38″ swamped B-weight .50 cal barrel. Josh cast the trigger guard and sideplate. He also made the ramrod thimbles and trigger. Josh hand forged the lock and tang bolts and made the front and rear sights, The rifle has a tapered hickory ramrod with rolled sheet metal tip. Josh fabricated all the patchbox release parts. The buttplate, patchbox and large Siler lock were purchased. The sugar maple stock is incised and relief carved. The stock was scraped and burnished, stained with nitrate of iron and hand rubbed with aged linseed oil. All the hardware, the barrel and the lock have been aged with ammonia, vinegar and saltwater to give a well cared for but aged appearance.

Josh also made the very nice hand forged bag knife with bone handle and pewter bolster. Gary Tingler contributed the excellent elk hide bag, hand sewn with waxed linen and with a nice edging and flap decoration. The bag also has interior pockets and a Kris Polizzi hand woven strap. Altogether this is a remarkable set, that just cries out to be used. As the old saying goes, it would do well to run the river with. It would be right at home on the Ohio, the Monongahela, or the Cumberland before the Revolution.