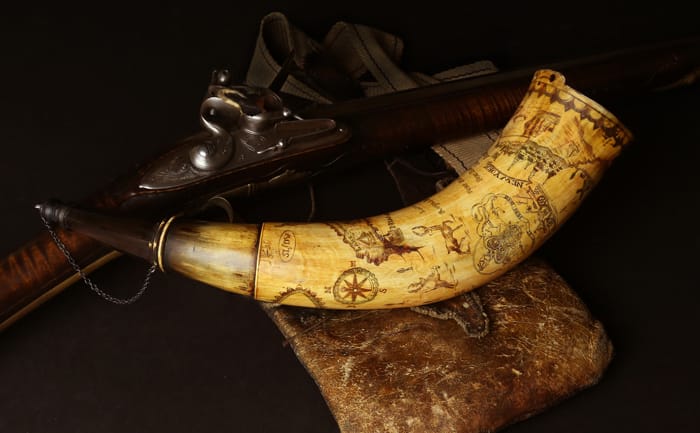 by Heinz Ahlers with photography by H. David Wright

Steve Lodding and H. David Wright have teamed up to create a spectacular engraved powder horn inspired by an original in a private collection. The antique French and Indian War period New York map horn, attributed to the “Pointed Tree” carver contains a base plug that was uniquely painted with a scene of a gentleman hunting birds over his dog.

Lodding, who made and engraved the horn, used features of the “Pointed Tree” carver for this horn. Wright painted the plug.

Steve started with a raw horn; 16 inches in length was donated by noted horn maker, Tom Bowen (American Tradition, July 2011). The completed horn with a 3 inch base plug features a paneled throat and decorative raised rings. The horn surface is completely covered with engraving of a map depicting New York to Lake Ontario including military outposts, waterways, cities, and towns of the mid 1700’s. Interspersed throughout are charming folk art images such as marching soldiers, windmills, ships, pointed trees, several deer, and a dog chasing and a hunter shooting a deer. A fine rendition of British coat of arms also adorns the horn. A cartouche is included, as were on horns during the 18th century and it has been left blank for a future owner to have his or her name engraved. To create even more interest and artistic appeal, Steve polychromed the engraving with red and green colors as were some of the very best map horns of the period, and then aged it with a patina to give it a warm pleasing look of an old horn.

Multi-talented gunmaker, horner, and all around talented artist, Steve Lodding has been a long time member of the CLA. This is his third work of art he has created and donated to the CLF Funding Raising Auctions.

Artist H. David Wright painted the base plug. Using oil paint such as was used on the original wood plug, Wright set about to copy the art as closely as he could, and also to recreate the aged look of the old painted plug. While examining the original plug, he found, through deterioration and chipped areas of the paint, it had been under-painted with a white base coat, oil paint, or possibly a gesso medium. So, to achieve the same appearance of the painted art, he used white gesso as an underpainting medium and painted over that with oils, adding the glazes and chipped off areas of the paint to replicate the age on the plug. To find a scene painted on an antique powder horn plug is rare, indeed, let alone one of a hunting scene which is very reminiscent of English works. A plug with a painted scene of a hunter makes this powder horn an even more unique contribution to this year’s Live Auction.

H. David Wright is a charter member of the CLA and this is his third contribution to the CLF auctions.