Knife with Quilled Sheath by Rob Parks and Linda Pritchard 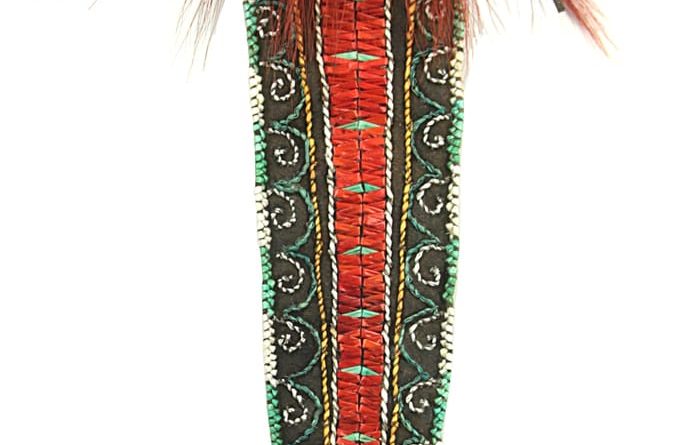 Knife with Quilled Sheath by Rob Parks and Linda Pritchard

It’s arguably the most important tool for any outdoorsman: a good blade. But for the modern-day frontiersman who favors period black powder shooting, not just any knife will do. This years CLF fundraising auction is fortunately graced with an outstanding knife and sheath set by artisans Robert Park and Linda Pritchard.

Accomplished bladesmith Robert Park handcrafted the knife, which is forged from 1084 spring steel. It’s a well-proportioned piece: the handle is 4 long, while the blade itself measures 5 inches. The artist skillfully married a historical pattern with a contemporary twist. Its an English trade knife, says Park, with some of my own styling. The handle is crafted from French box wood, with a linseed oil finish.

Park sites the CLA and its artists as a major influence in his work, having studied with noted craftsmen including Joe Seabolt, Ian Pratt, and the House brothers. The CLA, says Park, is simply a Great organization. The other artists give me a lot of inspiration to make better knives to get to a higher level.

This project, says Park, was the brainchild of quill artisan Linda Pritchard. Pritchard explains that the sheath which she crafted for this set is inspired by the quillwork and moose hair embroidery from the Great Lakes region of the 18th and early 19th centuries. The body of the sheath is constructed from brain tanned deer hide and lined with another sheath made from rawhide. In this piece, she says, I used silk and linen threads and tried to stay as historically accurate in the creation of the sheath as possible while using a bit of my own artistic expression. The completed sheath was then dyed with black walnut from the Pritchard farm.

Pritchard adorned the face of the sheath with a stunning pattern executed in porcupine quills and moose hair; the sheath is further set off with extra details including glass trade beads, brass hawk bells, and handmade tin cones filled with dyed deer hair. The artist largely crafts her own period-appropriate dyes: madder root for orange, indigo and verdigris for blue, and bloodroot for yellow.

While maintaining a respect for history, Pritchard explores her own artistic vision. The scalloped moose hair portion along the border of the sheath, she explains, was common among the Huron pouches as well as other Great Lakes tribes. The center zigzag design and the quilled wrapped edging was also very common and used throughout the 18th century by the Great Lakes tribes. Due to such historic examples, the artist observes, Im sometimes inspired to recreate an original, but the originals remain only as an inspiration, never as an exact copy.

This exemplary set is simply the artists way of contributing to an organization that has been crucial to their own development as craftspeople. I feel so humbled to be there among all the great artists, says Pritchard. I am so lucky to have the encouragement from the CLA members and fantastic artists there because I am sure without them I would have never been inspired to keep working to improve my craft.

For for information on the work of the artists, contact: