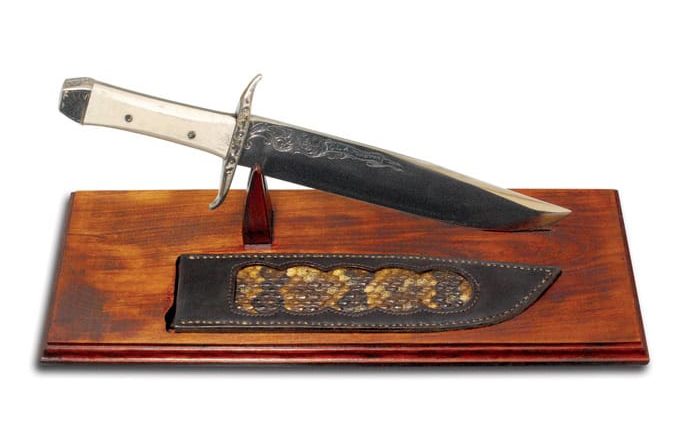 by Joshua Shepherd with photography by Gordon Barlow

Few blades capture the indomitable spirit of the frontier quite like the Bowie knife. It’s a fearsome edged weapon that’s quintessentially American: rugged, hardy, and better off left alone. In fitting homage to the legendary Bowie as well as the independent spirit it represents attendees of this year’s CLA fundraising auction will have the opportunity to own a stunning example of a contemporary Bowie crafted by one of America’s top artists.

The one-of-a-kind piece was created by West Virginia’s Keith Casteel: rifle maker, bladesmith, and legend in the blackpowder community. With six decades of experience under his belt, Casteel is considered a master in his craft; it’s a well-earned reputation that readily shows in this knife.

Casteel’s knife is a robust contemporary take on the classic Bowie. Measuring over 14-1/2″ in length, the knife sports a 3/8″ thick, 9-3/4″ long blade forged from 1085 steel, a high-carbon alloy that holds the keenest of edges. The knife’s handle is fitted with scales shaped from axis deer antler, and the handguard and pommel were crafted from German silver. The artist treated every metal surface on the knife including the rivets that secure the handle – with exquisitely rendered engraving. The blade itself is enhanced with a pithy motto paired with the defiant image of a rattlesnake: “Happy is he who Escapeth me.” The opposite side of the blade is engraved with a banner reading “C.L.A. Forever.” This museum-quality knife comes with a hand-sewn leather sheath embellished with snakeskin detailing, and the entire set is accompanied by a custom-fitted hardwood display stand.

The remarkable creations of master craftsman Keith Casteel are in high demand and infrequently available on the open market. An inductee to the Blackpowder Hall of Fame, Casteel has been crafting flintlocks since 1956; his work has been collected by celebrities and statesmen for decades. In fact, one of his rifles played a central role in a truly iconic moment in American gun rights history. At the 2000 annual meeting of the National Rifle Association, former NRA president Charleton Heston gripped one of Casteel’s rifles when he famously quipped “from my cold dead hands”

Casteel’s donation to this year’s auction affords collectors a rare opportunity to own not only an exemplary Bowie, but a work of art from a legendary maker. The longrifle culture, says Casteel, has been “a passion of mine for all of my life.” That passion for history, heritage, and uncompromising craftsmanship has resulted in a collector’s grade Bowie that’s one of the most significant offerings in this year’s fundraising auction.