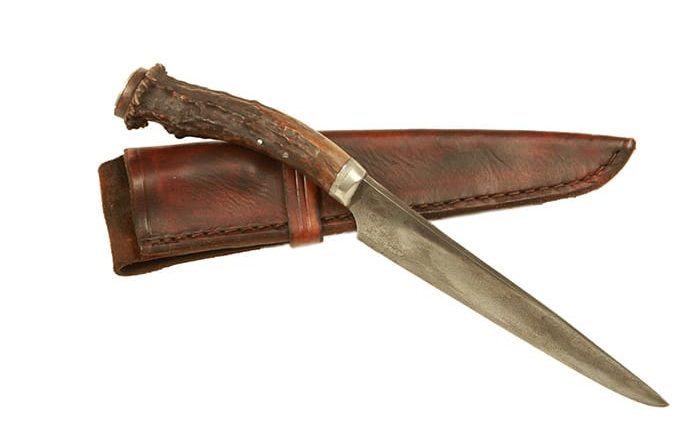 In 1748 George Washington was on his first adventure over the Blue Ridge in the Shenandoah Valley. Lord Fairfax had taken a liking to the 16 year old and thought to introduce him to the wilds and the art of surveying. In Georges Journal of My Journey Over the Mountains began Fryday the 11th of March 1747/8 Washington comments on their dinner with Solomon Hedges, Justice of the Peace When we came to supper there was neither a Cloth upon the table nor a Knife to eat with but as good luck would have it we had our own. Later in an entry he notes Everyone was his own cook. Our Spits was Forked Sticks our plates was a Large Chip as for dishes we had none. A good knife was a necessity to travel over the Blue ridge and beyond.

Charlie Wallingford had donated this fine and useful belt knife to the auction. The 6 inch hand forged blade is mounted through a poured pewter ferrule with two pins in an antler handle. The butt has a silver cap and a bit of border engraving. Charlie includes a fine businesslike belt sheath of polished cow hide. George Washington would have been happy with this knife.