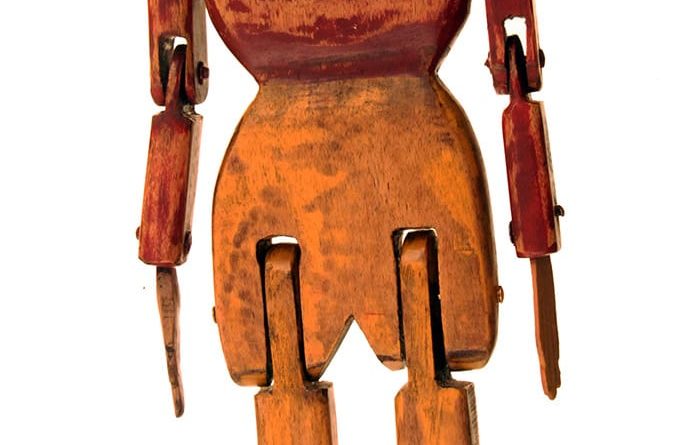 by Joshua Shepherd with photography by Gordon Barlow

Despite the passage of centuries, mankind, at his core, remains the same. Life in the 18th century could entail some pretty serious work, but everyone eventually needs get away from it all. Long before he penned the Declaration of Independence, Thomas Jefferson was a hard-working Williamsburg attorney who managed a veritable mountain of court cases. But on April 14, 1769, Jefferson recorded his expenses for a little harmless diversion: he paid 7 shillings and 6 pence for seeing a puppet show.

Virginia artisan Dale Powers has crafted a truly unique offering for this years CLF fundraising auction: a full articulated 18th century puppet. The origin of the Dancing Man, explains the artist, can be traced to France during the 16th century. They were known throughout Europe as Poupes la. In America, by the 18th century these puppets became popular in Appalachia. They were created on the frontier as toys.

Powers reproduction is crafted from hand-carved Appalachian white pine and measures 3 wide and 10-1/4 tall. The artist painted the puppet with a subdued color palette and then subtly aged the piece. Appropriately enough for a frontier toy, the puppets eyes and nose are made from white tail deer antler. The finished product is a charmingly well executed example of early American folk art. Its perfectly well suited for the junior reenactors at your next living history event, or as a display piece in your collection of primitive Americana.