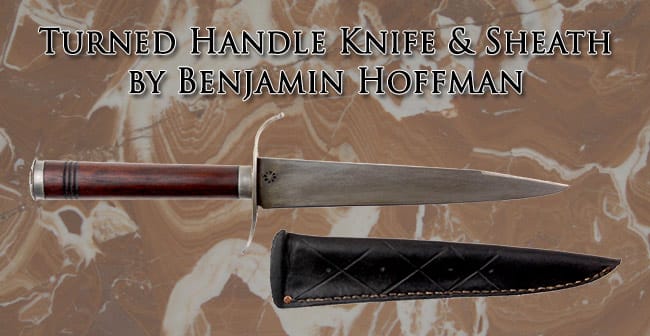 The CLF is proud to be able to offer at auction this finely crafted traditional belt knife donated by Benjamin Hoffman. This is a re-creation of the kind of hand crafted knife made by an accomplished frontier smith who was proud of his work and touch marked it.

The results, as shown in the photographs, are beautiful and functional. The design el-ements incorporate traditional 18th century knife style. The knife is 11 inches overall with a 6-1/4 inch European dirk styled blade. The walnut handle is set off with hand cast pewter ferrule and pommel. The knife has a full tang. The hand sewn and tooled leath-er sheath incorporates a belt loop. The sheath and knife together show the quality of Ben’s work. The knife is nicely balanced and easy to carry. A real working rig and the 1095 high carbon blade is the historically correct equivalent of the best 18th century knife steels.

Ben said he made this particular item for the auction because “It’s always great to read about how such Items were made but I found it to be much more fulfilling to actually be able to lay the book down and take up the hammer and tongs along with the anvil and forge and see what is possible with a little practice.”

He chose to donate to the CLA auction for several different reasons: he has always had a deep fascination and passion for cutlery and accouterments from 18th century and appreciates the CLF support for that art, and as Ben says we are recreating forgotten and dying arts and “if we choose to keep our knowledge and wares for ourselves, than our craft will be just that, DEAD! ”