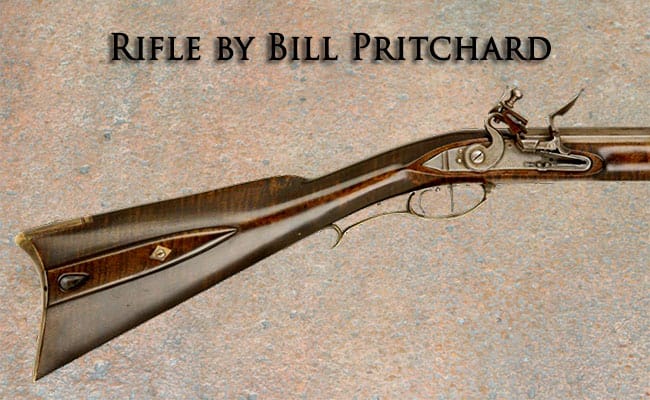 Bill Pritchard has been building rifles in Maysville since 1976, when he was motivated by the activities of the Bicentennial to try his hand at building flintlock longrifles. Bill was largely self taught, guided by Kindig, Thoughts on the Kentucky in Its Golden Age; Shumway, Rifles of Colonial America; and Recreating the Kentucky Rifle by Buchle. Bill estimates he has built about 75 rifles, 25 to 30 in the 5 years since he retired, and one or two a year before that. Bill builds near copies of historical rifles that interest him. When Bill sees a rifle he likes, he studies the rifle, the gunsmith who built it, and the gunsmithing school where it originated. When possible he handles and measures the original. Bill strives to keep a strong link to the history and the school and culture of the rifle or rifles that have inspired him.

The auction rifle Bill created combines characteristics of two closely related longrifles featured in Bill Ivey’s book, Schools of North Carolina Longrifles, number 44 and rifle number 32. Both rifles are from the Deep River School. Bill Ivey generously gave Bill Pritchard the opportunity to take measurements and make a tracing of the profile of the No 44 rifle.

Rifle number 44 is unsigned but attributed to Alexander Frazier the Elder or an associate. The pivoting wooden box cover is a distinctive style to date found only in Randolph and Guilford Counties of North Carolina. Number 44 caries a faceted pan Germanic lock and has an iron buttplate, trigger guard, and lock bolt plate. The thimbles are brass and there is an inlet brass diamond under the pivot screw for the box. The number 32 rifle, signed A Frazier, is brass mounted with a brass box and is estimated to date about 1803. This 32 rifle was the inspiration for the brass buttplate and trigger guard on the auction rifle. The buttplate and trigger guard are modified Reeves Goring castings and the thimbles are hand fabricated including the distinctive long rear thimble with a short tang found on the number 44 rifle. Bill incorporated the profile, lock and box of the 44 rifle and retained the double set triggers of the 44 rifle. A premium curly maple stock was used. With the 42 inch swamped Rice barrel in 45 caliber, and 13 1/2 inch length of pull, this is a fine handling, beautiful contemporary rifle with early Randolph County, North Carolina architecture.

Bill Ivey attributes the #44 rifle as an A Frazier rifle or possibly a David Gross, also of the Deep River School in Guifford County. Bill Pritchard’s use of the Frazier inspired brass furniture, brings the auction rifle solidly into the Frazier camp. This is the sort of rifle carried “over the mountains” by both frontiersman and Native Americans in the Cherokee Wars. Likely, with the plain and business-like elegant architecture, with and little ornamentation, this is a white man’s rifle, a scout or hunter who wanted the grease box covered.