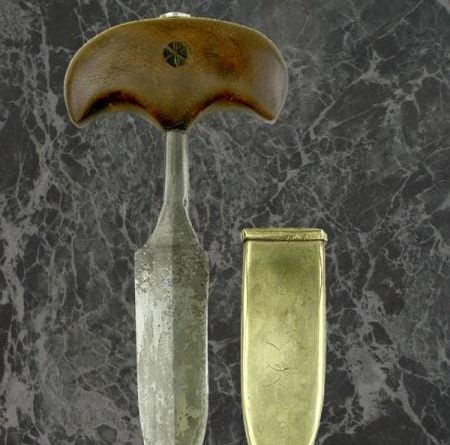 Joshua Crain has recreated one of those icons of the Mississippi River culture, the push dagger. This style was popular in New Orleans during the 1800s where it was known as a gimlet knife. One was involved in the Wilson – Anthony fight between elected officials in the Arkansas State Legislature in 1836. These knives have waxed and waned in popularity since the 17th century, this fine little rig of Joshua Crain’s may bring them back.

This hand forged dagger has a 3 inch blade and a 6 inch overall length in a classic double edged push dagger form with a walnut palm handle. Joshua hand forged this from spring steel off a old farm implement. He has included a brass sheath neatly engraved. The knife handle carries Joshua’s touch mark

Joshua is one of our younger CLA members but this is already the second time he has contributed to the CLF Fundraising Auction. The first was the Commodore Perry commemorative knife he donated in 2013. This years donation will make a fine backup to your Bowie knife or a great ac-coutrement for any of you gentleman re-enactors. I believe Joshua is a rising star and it would be good to get one of his pieces now.