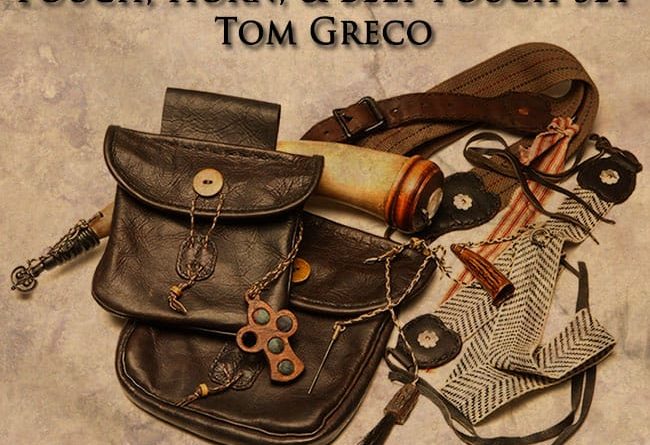 Tom Greco has donated a fine pouch and horn set with a matching belt pouch. The bag style is typical of Eastern Pennsylvania and is paired with a southern style horn suggesting an owner who moved down the Great Wagon Road as the frontier spread westward. Oil tanned buffalo hide is used in both the shoulder bag and belt pouch. Tom’s craftsmanship and attention to detail are apparent in the pillow ticking lining, welted seams and double stitching. Somewhere in their travels, both the shoulder bag and horn strap picked up some coin silver embellishment matching that on the horn base.

The horn and bag have separate straps – a convenient feature. The horn is adorned with coin silver on the plug and the plug is attached with silver pins. Tom has included a number of accoutrements he made; a loading block from curly maple, an antler powder measure, a pan brush, and a vent pick. The belt bag will be recognized as an added plus by rendezvousers and historical reenactors. When crowding up close to the camp fire or carousing in a tavern, there are times when you don’t want your horn and bag along but at the same time you don’t want to carry your 21st century wallet in your mouth.

A long-time rendezvouser and re-enactor, focusing on the Revolutionary War and French & Indian War, Tom was 23 when introduced to the experience by his good friend Robert Schumerth. Bob is an artisan of Western Native American art and encouraged Tom to learn to build his own equipment. Tom started building rifles and making accoutrements in his free time while learning all he could from books and videos.

He is supported by his wife Sandy and his family in his efforts. Sandy is also an accomplished artist in her own right as a Pennsylvania Dutch Fraktur artist and her work is offered on the CLA Sales website and in this auction.

Tom states he made this donation because he has learned a lot from the talented artisans of the CLA and he wants to do his part to keep the tradition alive.