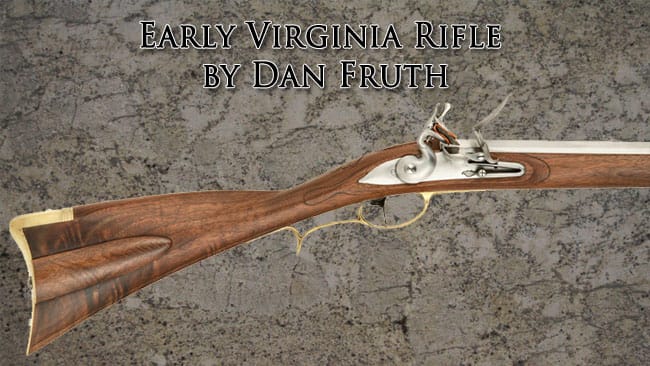 Dan Fruth is donating a pre Revolutionary War styled rifle. Dan handled the original he based this rifle on and took the measurements used. This is a Valley of Virginia styled gun, perhaps from Augusta County. The barrel, by Ed Rayle, was copied from dimensions taken from the original. It is 43″ long and 1 1/8″ breech at the breech, with a 50 calibre rifled bore. The lock is a Chambers Colonial Virginia. The trigger guard and butt plate came from Reeves Goering, and were cast from original furniture believed to have come from the same shop as this original rifle. The butt plate was swaged to bring it to it’s correct width, a whopping 2 3/16″ wide! The walnut stock was harvested years ago from native Ohio black walnut, and the finish is a leaded linseed oil finish Dan makes himself. The trigger reach is 13″.

Dan has been building muzzleloading rifles for over 40 years. He worked with Jack Haugh on his first rifle in 1972 and Jack has long been a mentor.

This rifle has the look of a working gun of the pre Revolutionary War era, and handles quite well. Original early rifles from the Valley of Virginia are difficult to date precisely. With the wide heavy butt this rifle may have been considered quite old fashioned by 1775 and could date as early as 1750. It has a very English style to the butt, wrist, and comb, almost like a mid 18th century Twigg fowler. The barrel would be in keeping with a Southern transition from the short barreled rifle to a longer length comparable to a fowler. The wrist and butt arguably are not yet the fully evolved American Longrifle and lock is in keeping with the 1750 – 1775 time period. This rifle’s sweeping, bold architectural lines exhibit the subtle blending of German and English design influences on the rifle culture in the Shenandoah Valley. We can certainly say this contemporary rifle is in the style of the third quarter of the 18th century. This original rifle was nick-named “woods runner” by Earl Lanning and that seems appropriate for its architecture and furnishings.

These early style rifles from along the Great Wagon Road were the tools of the legendary Virginia Rifleman who made an impression on George Washington as early the battle in Jumonville’s Glen. The same style continued in use through the American Revolution and spread North, South and West along the early trade routes. Such a rifle could have been a prized and deadly tool in the hands of a back-country Virginia rifleman in the Revolution. Such rifles also certainly found their westward through the deer hide trade, which had a profound influence on the southeastern tribes and back-country settlers alike, and spread the rifle culture along, through and beyond the Appalachians to the Mississippi.

The rifle as shown in the photographs is before a gentle aging was applied. This is a remarkable contemporary rendering of a traditional early Virginia rifle. CLF is proud to offer this rifle at auction and thanks Dan Fruth for making it available for the 2015 CLF Auction. Dan is a regular at the CLA Annual meeting, stop by his table at the show.