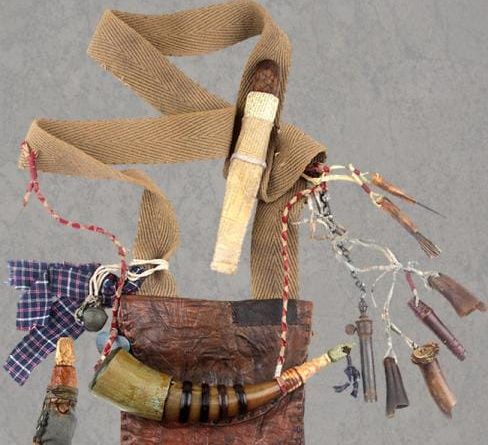 It’s desperate measures for desperate times, or so the saying goes, and hard times can turn desperate in a flash. A cat-a-mount “painter”, a rogue old black bear, or even a cunning red fox preying on the livestock could set a mountain family back in no time, and the predator would have to be dealt with before total ruination set in.

Once hard times struck, bad weather, a failed crop, a broken gun or even a simple shortage of lead and powder without the money to replace them would make it even worse. When things got really desperate, stories were told how many a poor mountaineer had to hold his shot until the target was in front of a good solid tree. That way if he missed, or the shot went through the animal, at least the lead could be dug out and used again. Makin’ do was nearly an art form for these hard working people.

This American folk art horn and pouch set is made to represent just such times, and each item tells its own part of the story. The banded horn is actually made of two pieces, the back half expertly fitted over the front to repair an otherwise tragic break, thus making the treasured horn usable again. At first glance, the worn leather pouch seems to be nothing special, but looking close you’ll see it displays as much character, ingenuity and tenacity as the old timers that would have used it. It’s outfitted with a ball bag made of a whittled wood nozzle and stopper and a small piece of left over store bought cloth that was too good to throw away. A crude bag knife is made from a salvaged bit of old steel, and an interesting scabbard hang from the strap. The curious sheath is lined with paste board and old newsprint that can still be read right through the clear raw hide. A few strips of tattered cotton clothing serves for patchin’, and an old sleigh bell appears ready to hang around the old coon hounds neck, or even on a hobbled horse so it would be easier to find him come morning, but on closer inspection you will see that it’s been stuffed with the same patchin’ that hangs on the bag to silence it, for times are desperate. Scaring the game, or even alerting a lurking foe is simply not an option. A painted tin heart hangs on the rear horn strap, whether just to decorate the pouch, or to remind the mountaineer of a sweetheart back home isn’t clear, but the group of measures attached to the front of the bag spells it out plain. Hanging and initialed in order, put together they spell out one word “DESPERATE”yes, its desperate measures for desperate times in the mountains.

This set was created for the 2015 auction by Tim Crosby and TC Albert.

For more information about this piece or others like it by these two artists:
Tim Crosby can be contacted via email at: ccrosby004@columbus.rr.com
TC Albert can be reached at: huntingpouch@gmail.com
Click For Absentee Bidding.