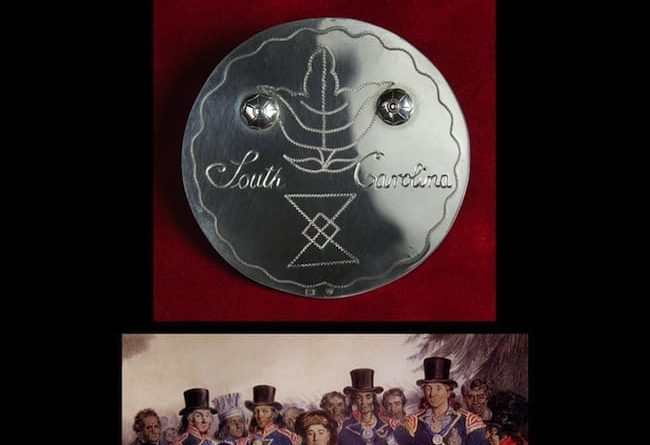 “I was involved with competition black powder shooting and Marilyn accompanied me to a lot of shoots through the years. One day Marilyn mentioned to Chuck Leonard that she got bored at the shoots so Chuck told her that he would show her something that will make it a little more interesting. At that time Marilyn started her study of silversmithing and I came under the spell, too. Under the guidance of Chuck, we have developed our art, started our company and have become regulars on the Living History and Trade Fair circuits. When we’re not on the road, we call Brooklyn, Michigan home.”

Before the husband and wife team learned the silversmithing trade and launched their business, Wayne worked with master gunmaker and wood carver John Bivins in Raleigh, North Carolina during the 90s. Together they did museum restoration and carved colonial period high-art wood installations for museums and private clients.

After returning to Michigan, Marilyn and Wayne began their research and schooling in the art of silversmithing and both attribute Chuck Leonard as their inspiration to become silversmiths.

The sterling silver “Moon” or “Shell” (also sometimes referred as gorget) is closely copied from one (circ. 1760) found in Tugabachee, Alabama. Several examples of these type trade silver items are shown on page 68 in the book, SILVER IN THE FUR TRADE 1680-1820 by Martha Wilson Hamilton.

Decorated with two buttons, it is rocker engraved “South Carolina” with a tulip motif and a wave designed border. A design composed of two opposing triangles that represent a thunderbird of the upper world; the four diamonds represent a rattler of the underworld; in the middle a cross represents the four cardinal directions. It resides in the collections of the Alabama Department of Archives and History, Montgomery, AL.

The historical significance of this silver shell and the quality of the Holcombs’ work make it a most attractive piece to be added to one’s collection or to be worn by discriminating Natives Americans and Indian living history participants.

To see more of Wayne and Marilyn’s work visit their website http://www.xxtradesilver.com