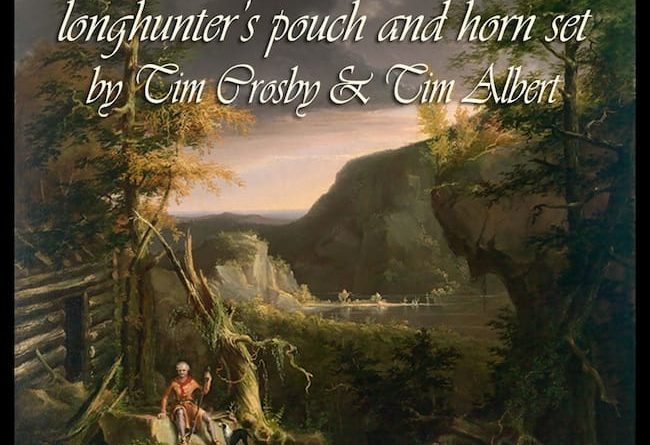 Tim Crosby and TC Albert teamed up to make this copy of a Daniel Boone horn and pouch set.

The set is based on images of a pouch and horn known to have once been owned by Daniel Boone, and traded to a neighbor along the Big Sandy River in the late 1790s.

In the book, My Father Daniel Boone, his son, Nathan Boone relates some of the events taking place during this time period, when for several years the Boones and their friends were engaged in hunting bear and selling the smoked meat, hides, and rendered oil. Nathan recalls taking 156 bears in 1797 along the Sandy River.

Like the original, this simple homespun pouch and horn set looks as if Daniel could have made and used in one of these back woods bear camps. Besides Boones initials D.B., the horn is carved with primitive drawings of Boones rifle Tick-Licker, and his tomahawk, trap and cabin. There is also a carved deer, a beaver, a pinwheel, a web, and a menacing sarpent rattle snake. The horn is accompanied by a turned antler measure just like the one seen with the original set.

The typical cheap butcher knife is as simple as the rest of the outfit, and is made with the commonly carried thin steel blade described by Nathan in the Draper interviews.

Boone and his family left Kentucky just two short years after Nathan’s big bear hunt, and moved to Missouri where the events of the looming War of 1812 would soon find them. Daniel would serve at home protecting the family and raising the alarm during Indian raids, while Nathan would raise and lead a company of mounted rangers.

For more information about the original Boone pouch set that this auction piece was patterned on, please follow this link: