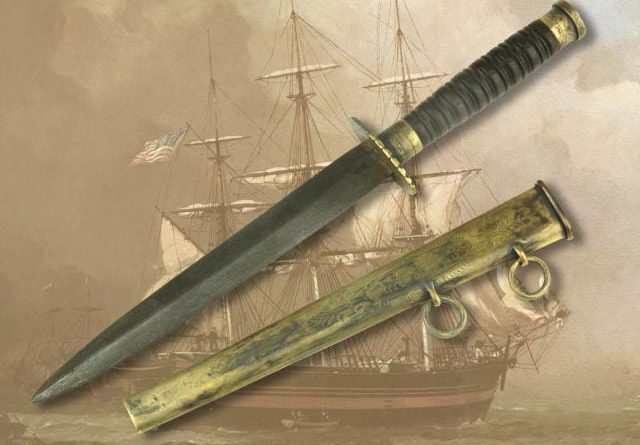 The war of 1812 was ignited over our right to free trade and unrestricted shipping. To demand these rights, our fledgling maritime force had to square off with the Kings own royal Navy. Britannia prided the ability to rule the seas, and her fighting ships and the sailors that manned were some of the best disciplined and equipped in the world at that time. That didn’t stop us from taking them on head to head, both on the great lakes and on the open oceans. Determined to fight with what ever means they had available, our brave fighting men were often forced to arm themselves as best as they could with their own private weapons instead of relying on the government to provide them with regulation issue, and this midshipman’s dirk was just such a private weapon, and it would have found service in the hands of just such a man.

In honor of these fighting mariners, Glenn Mock has crafted a very fine Midshipmans dirk for our CLA War of 1812 live auction. Glenn told us that this dirk is a copy of an original Napoleonic / War of 1812 period English/American Midshipmans Dirk. It is not a bench copy since I only had good photos and measurements to go by.

Glen forged the double edge blade from 1095 steel, and crafted the guard from brass. He turned the handle from black walnut, and capped the pommel in brass sheeting.

According to Glen, the sheath was the hardest part of this project. Like the pommel cap, it is fashioned from sheet brass, as well as round and half round brass wire. All of the scabbards seams were silver soldered. As a finishing touch, Glenn closely copied the decorative period engraving style found on the original.

Glen states: “I owe my knife-making start to my wife, and to my long time friend Doug Delsemme. He encouraged me to attend a knife making class that Cousin Willy,Hershel and John House were teaching.” That seminar and those three talented teachers really helped to set him on his way.

Glen started shooting black powder in 1968 and in 1969, and built his first engraved powder horn then. He made a full time living for several years as a horner, shrimshander, and as a silver and gold smith. Glenn says that he also owes much to artisans like Ray Miller, Jerry Riness and many others that have helped him through the years.

Besides making knives, Glenn and his wife operate a guest ranch called the Mockville Land and Cattle Co. in Missouri, where they raise horses and cattle, and rent cabins to the city folks who want a taste of country life.