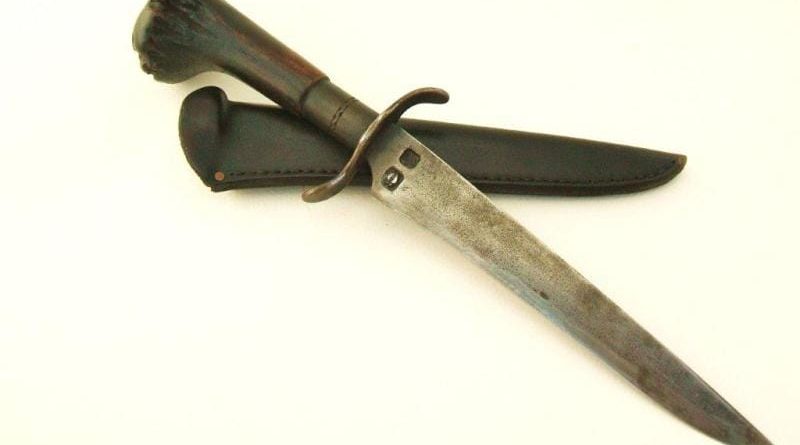 An undeniably important piece of our shared “Culture of the Longrifle” is the knife. So inseperable were frontiersmen and their ever present big blades, that they were identified by them and actually called “longknives”, both a name and a trait that persisted as long as such men roamed our American frontiers. Our auction wouldnt be complete with out a few of these iconic knives to choose from, and true to form, CLA artists specializing in the creation of these beautiful side arms have risen to the occation and are presenting us with four real gems.

First up, Dana Buchanan has crafted a sleek, antler hilted hunting knife. The blade tapers toa graceful, slightly clipped point, and its traditionally constructed with a through tang, an iron ferrule, and a forged iron guard. Danas touch mark B is stamped into the steel blade. Like all of Danas blades, this knife would be the envy of any long hunter past or present.

Next, Daniel Casey has forged us one of his beautiful Woodburry school knives. The knife was then specially engraved and sheathed by Hershel and John House. From Daniel’s forge work and Hershel’s engraving on the knife itself, to John’s leather work in custom fitting up the sheath, I’m sure you will agree that this collaborative effort has turned this one of a kind piece into something really special.

Joe Seabolt has also forged us a very special knife, and used an origional featured in Madison Grants ground greaking book The Knife in Homespun America to base it on. In Joes opinion, this knife definately represents everything a “homespun fighting knife of the 1812” era ought to be. From the base of its antler handle to the tip of its slightly clipped point, this knife could easily decide the outcome of any hand to hand frontier contest, and as such its owner would have carried and relied on it as his primary side arm.

Finally, though not shown here, I want to mention that Billy Heck of Martins Station is forging us up a riflemans knife as well. Billy works as a full time professional historical interpreter, and is very qualified to know what would be expected in an early nineteenth century knife from personal experience. Likewise, his experience at the forge allows him to make a knife that he knows would serve a frontiersman or militia volunteer well.

Whether you are a collector, a reenactor, a traditional hunter, or just a lover of American longknives, you wont want to miss out on a chance to see and bid on these.