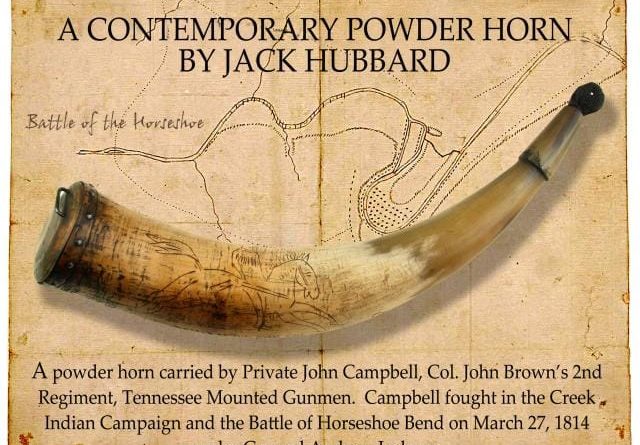 Though the War of 1812 was a nationwide war, most battles were fought in the Northeast, on the high seas and on the Great Lakes. But in the South turmoil among the Indians was promoted by the British and their Indian allies. The Creeks, known as the Red Sticks, armed by the British carried the war to the white settlers living on the frontiers, including forays into Tennessee. In August 1813, Red Sticks attacked and captured Fort Mims in Southern Alabama, slaughtering 250 men, women, and children. This massacre galvanized the Southern states, and Tennessee sent an expedition of Tennessee Militia under the command of Major General Andrew Jackson to destroy the Indian menace.

In early October, 1813 the Tennessee troops rendezvoused at Fayetteville, Tennessee and under the command of Jackson moved into Alabama to carry the war to the Red Sticks. A series of successful battles were fought at the Creek towns of Talladega, Tallasahatchie, culminating in the Battle of Horseshoe Bend in March, 1814.

The Creek town named Tohopeka sat in a horse shoe shaped bend on the Tallapoosa River. On March 27, Jacksons forces which included Colonel John Coffee’s Tennessee Mounted Gunmen, and augmented by the US 39th Infantry, attacked the fortified position and slaughter on a grand scale followed.

At 10:30 a.m., Jackson began an artillery barrage which consisted of two cannons firing for about two hours. Little damage was caused to the Red Sticks or their fortifications. Coffee’s Indians(numbering about 600 Cherokee, Choctaw and Lower Creek) and his cavalry began crossing the river and fought the Red Sticks on their rear.

Jackson ordered a bayonet charge. The 39th U.S. Infantry, led by Colonel John Williams,[4] charged the breastworks defending the camp and caught the Red Sticks in a cross fire.

The battle raged for about five hours and at the end nearly 900 Creek warriors died and casualties among the Tennesseans numbered 47 dead and 159 wounded.

One soldier who participated in the Creek campaign and was at the Battle of Horseshoe Bend was John Campbell of East Tennessee who served as a private in Colonel John Brown’s 2nd Regiment of Volunteer Mounted Gunmen.

Just over 200 volunteers formed this unit. They came mostly from Bledsoe, Roane, Anderson, Blount, and Cocke counties in Tennessee, and were used primarily as guards for the supply wagons traveling through Creek territory. As part of Doherty’s brigade, they were put under the command of General John Coffee at the Battle of Horseshoe Bend where they participated in the fighting.

Forty-seven years after the battle, Campbell recalled that “The Indians had felled trees into the river. In the effort to escape they would crawl out on these, when Coffee’s men would pick them off, and they would drop like turtles into the water.”

Jack Hubbard, CLA member of Dunbar, KY made a powder horn for the CLA auction to commemorate John Campbells servicein the campaign.

While on campaign with General Jackson, a horn of this nature could have been done. As time would permit, he would scratch his thoughts and memories on his horn. Folk art has been described as being done by a untrained hand. I dont think of this type of art work as being a conscious thought practiced by those who did it. They just did it. I’m sure their reasons varied I believe it to be a true art form, simplistic, rural with a certain comfort

For the past few years, I have been doing more of these folk art pieces. Softer tones and more rounded corners are more appealing to me. Always have been, more so now. It is an early Southern backwoods influence to my work.

I have been building knives, shot pouches, guns and horns pretty much full time for about 20 years. I have leaned toward the folk art pieces in the past few years. I simply enjoy them more. When I had the opportunity to handle original pieces, they had a lot to say. The softness of tone and rounded corners was the first thing I was drawn to. I try and inject the same into my work. The mind to hand is something that sometimes very completed. It works on occasion. But it is what I strive for. Again, it’s an early Southern backwoods thing I enjoyed making the horn. Thanks for letting me be a part of this years auction. Jack Hubbard