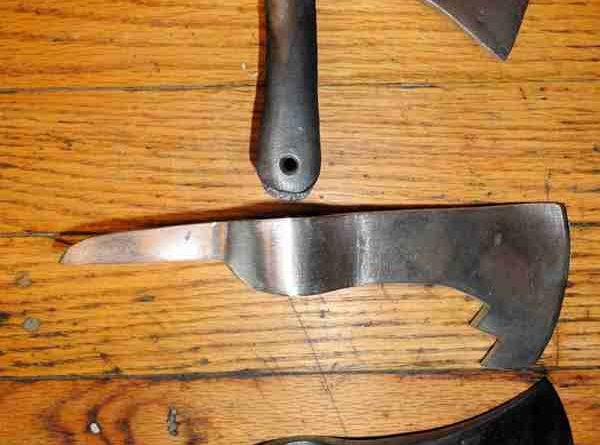 In the War of 1812, during naval battles on the Great Lakes or on the high seas, it was customary for ships to engage with cannon as they closed upon each other, and then to finally board each other where the final outcome of the engagement was settled in hand to hand combat. With its sharp steel spike, the boarding ax was designed to pry red hot cannon balls from the wooden decks before they could catch fire and its ax like bit was perfect to chop away any tangled rigging that fell from shattered masts. But when battling ships closed and boarding parties attacked, this tool became a substantial weapon in the hands of a determined man. Blacksmith and artist John Donelson of Clear Lake Mn. is hand forging a complete set of three boarding axes, each reflecting a variation of the styles then in use by the Americans, the French, and the British navies. The image shown was taken in his shop, and is of the forgings in progress. They are finished now, and this rare assemblage will be among the special items upfor auction at the 2012 Contemporary Longrifle Associations annual fundraising auction.

An ax of a different kind also played a part in the War of 1812. The Ft. Meigs ax was proportedly unearthed from the battle field of thet name in Perrysburg Ohio. Built by General William Henry Harrison, Ft. Meigs was envisioned as a staging ground for American assults into Canada, but in May of 1813, the fort found itself under attack from forces led by Proctor and Tecumseh. During the seige many skirmishes ensued as reinforcements to the fort began arriving from Kentucky. At some point it can be imagined that one of these Kentuckians lost his personal belt ax, and artist Bart Dellinger of Woodstock Va. has made a copy of it to include in our event. Bart has provided us a photo of his great little ax as well, and you can see how perfectly it would serve a contemporary long hunter today just as it did the Kentucky hunters and militiamen during the War of 1812 .