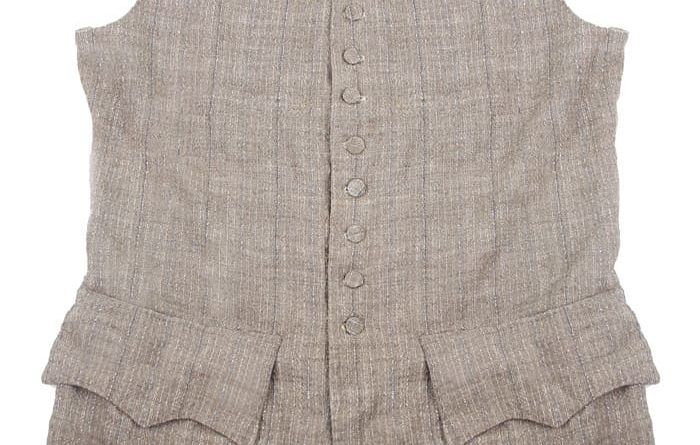 For General George Washington, the mundane duties of supply and logistics would come to be as important as strategy and tactics. Washington, who cut his teeth on the western frontier during the French and Indian War, was keenly aware that appropriate clothing was crucial to the fighting trim of his men. When the cash-strapped Continental Congress decided in 1775 to supply the army with linen hunting shirts, Washington was concerned that the men would be ill-prepared for cold weather. In a letter to Massachusetts authorities, the general strongly suggested an article of clothing that could be worn under the frock and would be cheaper and more convenient than a full uniform. Each soldier, he thought, needed to have a warm Waistcoat.

From the drawing rooms of London to the wild American backcountry, the waistcoat was a ubiquitous article of clothing in the 18th century. At this years CLA fundraising auction, bidders will have the opportunity to take home a custom-made circa 1750 waistcoat from artist Karen Hainlen. The waistcoat is one of the most crucial articles of clothing for todays reenactors, and Hainlen offers some of the finest garments available to the living history community. This waistcoat is made from period appropriate linsey-woolsey, hand spun and hand woven by Hainlen. The artist, who keeps historical authenticity paramount to her work, used an authentic period pattern by L.P. Ryan.

The back and lining is cut from 100% linen material. All topstitching, buttonholes and eyelets are done by hand. This waistcoat has functional pockets on the outside and a hidden pocket inside the left front. The outside shoulder seam has been designed to 18th century style but the lining shoulder seam has been cut to 21st century style so that the wearer “feels” a comfortable modern shoulder seam. Even small details like the buttons have received close attention to blend seamlessly with the garment. I use a button base, explains the artist, and cover it with the same Linsey-Woolsey used on the front of the waistcoat. The buyer may keep this waistcoat an X-large, 46-48 – or trade for one of a different style, size or material preference. A trade may require additional time to make a custom waistcoat.

Hainlen, whos listed as one of the nations top artisans by Early American Life magazine, has been sewing since she was eight years old and has been spinning and weaving for nearly two decades. The artist notes that the CLA is an important facet of her career. It means that I am an artisan that does quality work keeping with the traditions that our early patriot ancestors used. I like using these skills that I have learned, keeping them alive. There is just something very rewarding when making something entirely from scratch and also very period correct.