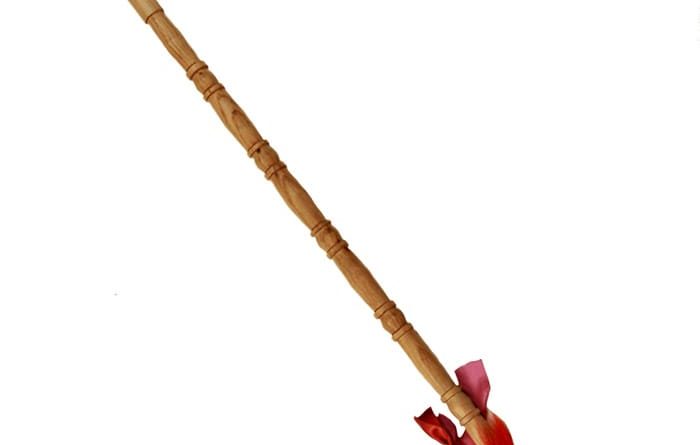 The Chippewa or Ojibwe were a large indigenous nation with an agricultural history and a great engagement in trade. They traded copper, pipestone, and furs. By the late 18th century this highly civilized tribe had absorbed cultural elements and material goods from the Cree to the north, the Iroqouis to the east, and both French and English trade items.

The traditional Ojibwa smoking pipe incorporated some of these changing cultural influences. Pipe axes came into some use, trade beads and metal inlay work appeared on both stone and wooden pipe bowls. Pipe stems might be longer or shorter than 17th century styles.

Don Shaver is a full time native American interpreter at Martins Station. He is also a dedicated student of Ojibwe culture and presents this interpretation of an late 1700s ceremonial pipe. The walnut burl bowl is pewter inlaid and has an almost 3 foot long oak stem. The artistic level of this pipe is high, the geometric pewter inlay blends well with the smooth planes of the pipes bowl. Don is a stickler for natural finishes and they work well on this piece. Don is particularly interested in native American and frontier pioneer woodworking techniques. He is a fine artist and a careful researcher and the Auction is proud to have one of his works to offer.