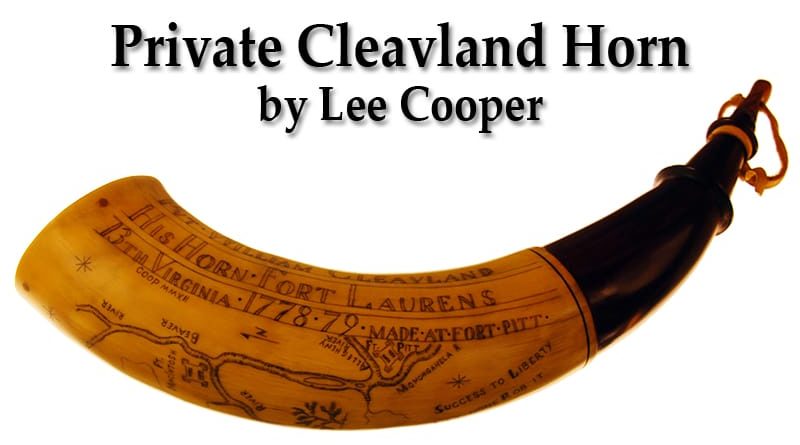 Scrimshawed powder horns served as useful maps and as journals for the early frontiersman. Dated map horns assist us in picturing a person, place, and time in history.

Lee Cooper created this Private Cleavland commemorative horn. This is a fine map horn that is inspired by Private William Cleavland who was killed at Fort Laurens in a British led attack by a large Indian force during the Revolutionary War.

Fort Laurens was built in late 1778, and attacked in February of 1779. The Fort was attacked by British Colonel Henry Bird of the 8th Regiment of foot with a mixed force of Wyandotts, Mingos, Delawares, and Munsees. The seige lasted over a month until relief arrived from Fort Pitt. Over twenty colonials died at Fort Laurens.

If you do not know where Fort Laurens was you should buy the horn. The construction and engraving on this horn is superior. It is good that Cooper has signed and dated this nicely aged horn avoid future confusion.

The Ohio Historical Society has a nice, though small, museum at the site, you can visit their webpage at https://www.ohiohistory.org/visit/museum-and-site-locator/fort-laurens.