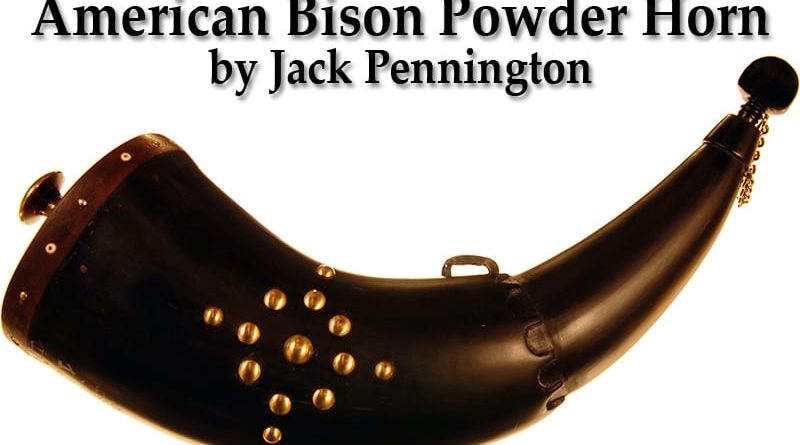 When one thinks about the frontier, one of the animals that come to mind is the American Bison. From the hills and blue grass land of Kentucky to the Great Plains and Rocky Mountains, this animal provided meat, fur, hide, bone and horn for food, clothing, shelter and tools to both native and European people alike. In keeping with this spirit, Jack Pennington has created and is donating a buffalo horn that could be found from the cane lands of Kentucky to the Southwestern fur trade around Taos and Santa Fe.

The horn itself is large measuring 14″ around the bottom curve and 12″ around the base. The base plug is American black walnut and is shaped to the natural contours of the horn. The base is connected to the horn body with hickory pegs and is inletted with white trade beads with alternate brass pins. The spout plug is an ebony fiddle peg connected to the horn body by a brass chain and german silver pins. The horn body itself is decorated with 24 brass trade tacks in two separate designs, a starburst and cross on alternate faces. The hanger on the horn is a forged staples inletted into the horn body and a mottled brass drawer pull is on the base. A white dogwood blossom and maker’s touch mark have been scrimshawed on the bottom curve.

Jack and his wife Melody are longtime members of the CLA. Both are long time primitive campers, shooters and reenactors. They are the founders of the The Society of Northwest Longhunters, which has been in existence since 1984. This is an organization dealing with the citizens of the Northwest Territories, both native and European American, in the 1780’s.

Jack has been building rifles, powder horns and accouterments since 1984.

Jack Pennington may be contacted via email at jpennington@cinci.rr.com or by telephone at 513-245-9912.