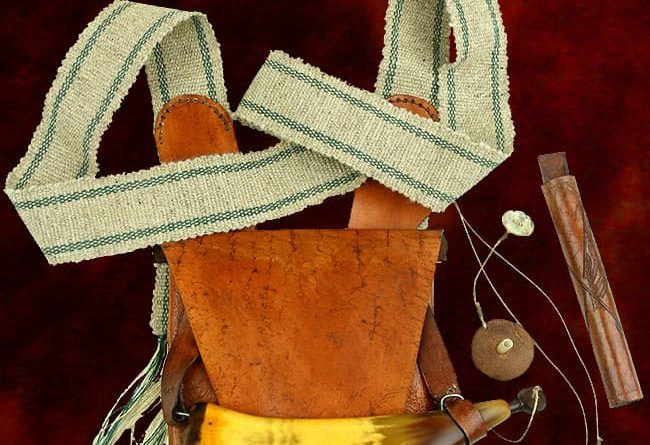 Through genealogy research, we found that my fifth great grandfather, Charles Adams 1745-1780, a farmer in northwest North Carolina, was a member of the North Carolina Rangers. He fought in Revolutionary War battles in the southern theater from 1776 until his death in 1780. He served with General Griffith Rutherford during the Cherokee Campaign and with Captain William Lenoir’s Company in both the Surry and Wilkes County Militia.

This hunting bag reflects the design that he might have carried as a horse trooper. I researched the Revolutionary period and found what I wanted in Jim Webb’s book, Hunting Pouches, Powder Horns And Accoutrements of Southern Appalachia. I have also hand fashioned some accoutrements that could have been in the bag and passed to his surviving family. This bag and accoutrements were made to honor my 5th Great grandfather Charles Parkingham Hooper Adams and his service during the Revolutionary War.

The other simple collection of accoutrements include items that would have been passed down to a grandson with the addition of new things needed for a squirrel rifle. I made the ball tube with a crossed flag and sword to reflect my grandfather’s war service, a leather powder funnel with a goose quill and an attached clamshell button, a small deer antler powder measure and pick beaded with red white heart beads.

I benefit daily from my CLA membership by reviewing leather-working examples, examining others techniques and researching historical items. The CLA sales site has opened new markets for my handmade items. My contribution to The Live Auction is a way for me to show my appreciation and help CLA reach its goals.