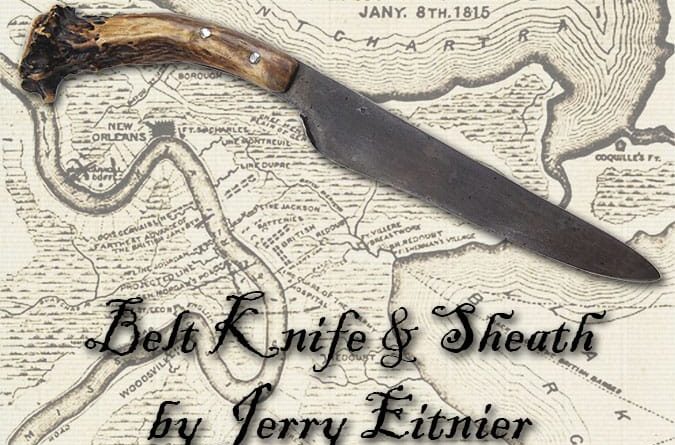 Indiana gunmaker, Jerry Eitnier is a returning donor to the CLA fundraising auction. Jerry is no stranger to the muzzle loading sport and art. He has been involved for more than 40 years. He joined the National Muzzle Loading Association in 1973, and in 1987 he built his first longrifle. He became a charter member of the Contemporary Longrifle Association in 1991.

Jerry is strongly influenced by Hershel House’s work, he builds guns the style of “the Hershel House Woodbury School” with iron mounted guns being his specialty. Jerry follows the style of the frontier smiths, making the tools needed to survive on the frontier. Utility, dependability, and longevity under rough conditions were the important criteria. Besides building firearms he has broadened his talents into the arts of blacksmithing, crafting knives and making powder horns.

He has studied under some of the most noteworthy artists in the field, taking five years of classes at the Annual Traditional Arts & Arms Making Workshops at Conner Prairie Living History Museum in Fishers, IN. There he was taught by gunmakers Hershel House, John Schippers, Mark Silver and blacksmith Melvin Lytton and others. Additionally, he’s had the opportunity to work with Frank House down in southern Illinois. Jerry is quick to credit others for his success, “Most of what little I know I learned by doing but so many people have helped me along the way and I can’t thank them enough.” Today Jerry also shares his talents, mentoring new makers, like Elijah Froedge.

The knife Jerry created this year has about a 5 1/2 inch cutting edge and is about 10-1/2 inches overall. It was not built with a dial micrometer. Hand forged from 1080 steel with an Indiana antler handle it is is an honest homespun knife typical of the frontier anytime from 1750 to 1860. It comes with a rugged serviceable sheath. The knife has a great feel and is meant to be used. Jerry would be disappointed if you hang it on the wall.