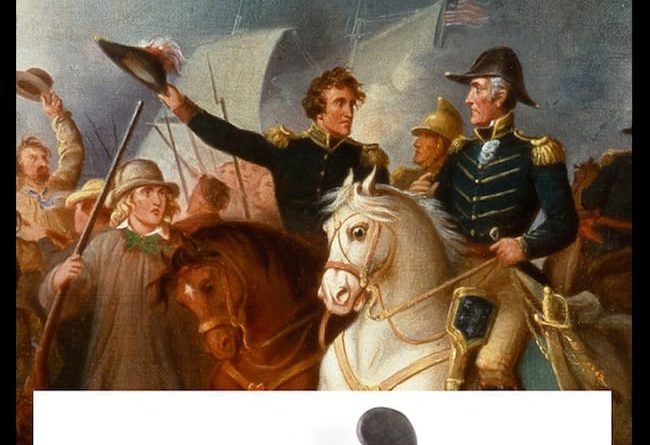 Trekking across the Louisiana bayou two brothers rushed to get to the besieged port city before it was too late. Even though a decisive American victory had been declared, the pair was disappointed that the battle had ended and that they had missed the chance to share in its glory.

The British had been “whooped”! And though Jim and his brother Rezin had just missed it, the other “Half Alligator-Half Horse” men that had followed Andrew Jackson throughout the war of 1812 to its final battle would have been proud to carry one of legendary fighting knives that the Bowie’s would later make famous. In fact, the Bowie knife was arguably destined to become at least as famous as battle the Battle of New Orleans itself.

Imagining Jackson’s men armed with such a formidable blade inspired the re-creation of this knife. Bladesmith Joe Seabolt has created a scale interpretation of the knife shown both on page #141 and the back cover of the book “Accoutrements II” by James R. Johnson. From its “false edge” clipped point to its hard wood handle, in basic size and shape this deadly side arm incorporates all of the characteristics normally seen on a classic Bowie. Although this style of knife is a little later than what Joe normally makes, it is one that he has wanted to copy for a long time and he thought the 2013 CLA fundraising auction would be the perfect reason to finally do so.

Also hand forged are the knife’s traditional “S” shaped iron guard and the matching iron sheath fittings. After forging, once the blade was tempered everything was painstakingly fitted and then carefully finished, resulting in another fine example of the authentic early American cutlery for which Joe is so famous.

Every detail of the big knife and its custom fitted leather sheath has been taken into consideration; including the use of a hand selected billet of aged “old hickory” wood that was used to make the handle of this special knife that would have done “Old Hickory’s” men proud.

Joseph Edman Seabolt, native Cincinnatian, is a journeyman electrician by trade, and a blacksmith courtesy of Steve Marshall of Goodlettsville, Tennessee. His knife making is the product of the teachings of both Marshall and Hershel House, the latter, Seabolt states, “has become not only my mentor, but a close friend as well. House is ‘my inspiration.” Joe has attended four seminars at Canter’s Cave in Jackson, Ohio, taught by both Hershel and his brother, John House.

Joe has been married to Diane, an RN, for twenty-three years and the couple lives in a log house, that he mostly built himself, in a woodland area near Goshen, Ohio. He works in his blacksmith/workshop he also built himself from logs taken from an old Virginia cabin for his Cedar Ridge Forge.

Seabolt grew up, like many of us, watching Fess Parker as Daniel Boone on TV, and often “went into the woods to try to emulate the great backwoodsman.” He began making knives at about age 10 by grinding down saw blades and crudely applying rough handles. In his late teens he “got a little better and was making blades using the stock removal method.” Joe began building custom made, hand forged knife blades in the early 1990s at Historic Mansker’s Station in Goodlettsville, Tennessee. Under the tutelage of Steve Marshall, the resident blacksmith at Mansker’s, Joe was taught to hand forge blades on a charcoal forge with a bellows and 18th century style tools. He subsequently set up his own forge and equipment and began making custom knives in this old-fashioned way.

Seabolt’s philosophy is that “knives are one of man’s oldest and most indispensable tools, and my goal is to make cutlery that not only has an 18th century look and feel, but is also a functional tool. Someone may have to depend upon a knife in an emergency, and I always keep this in mind. I want my knives to be historically accurate, but mostly they must feel good in the hand and be able to do the job for which they are intended.”

His artistry tends toward the Early Rifleman style with a long, graceful blade hammer forged from 1095 high carbon steel. Joe utilizes a special heat-treating that quenches the blade to make the spine softer than the edge, same way as the old time cutlers. This method produces a more flexible blade with maximum strength that makes it easy to sharpen and hold an edge longer than most. Seabolt states of his finished product, “No knife leaves my shop until it will shave hair!”

Joe’s knives are handled primarily with antler and bone, but he offers various American hardwoods and ebony as well. He states, “I carefully select antler for straightness and size and may look through 100 pieces to find five that meet my needs. When people pick up one of my knives, I want them to tell me it fits their hands so comfortably it’s as if it was made just for them” Joe uses a finish that gives the completed work a feel of age and toughness, but is still a beautiful example of the maker’s work. His sheaths are made with rawhide liners sewn with catgut and covered with either brain-tanned deer skin or bark-tanned leather sewn with linen thread.

Custom tomahawks and belt axes are also built by Seabolt, from the same hammer forged 1095 carbon steel, and are patterned after those of the 18th century Indian trade. These tools are handled in curly maple, hickory or American walnut. He uses only the best materials in both his knives and tomahawks, and they carry a lifetime guarantee from defects in workmanship.

Joe sometimes builds custom longrifles, which he states are of the Woodbury School, but he personally prefers building custom knives and tomahawks. He began his riflemaking in 2006 after attending a seminar taught by Hershel House at Canter’s Cave in Jackson, Ohio. There, he polished his knowledge of hammer-forging rifle furniture – ramrod thimbles, side plate and nose cap – the style made popular in muzzleloading circles by the House brothers of Woodbury, Kentucky.

Since the early 1990s, Joe has made “hundreds of 18th century style knives.” This year he donated one of his early rifleman knives with custom leather sheath to the Contemporary Longrifle Association [CLA] for the organization’s 2013 Fund Raising Auction.

Several years ago Joe teamed up with noted gunmaker Ian Pratt (Ohio) and together they teach knife making classes at seminars held by the Log Cabin Shop in Lodi, Ohio. These workshops are rewarding to both builders and the class members get the expertise of two masters in the trade. For more information about the classes, contact Joe at (513) 722-4321 or Ian at (330) 814-3748. The Log Cabin Shop can be contacted by email at: logcabin@logcabinshop.com or go online at: http://www.logcabinshop.com

Joe Seabolt is as generous as he is talented; he states of his fellow craftsmen, “Attending CLA shows and meeting the best artisans [from] around [the country] has really improved my own work…Joining the CLA has been one of the best things I have done….” He also belongs to the 2nd Company of the North Carolina Militia and attends living history events at Martin’s Station near Ewing, Virginia, The Fair at New Boston in Springfield, Ohio, and the shooting matches at the National Muzzle Loading Rifle Association’s Walter Cline Range in Friendship, Indiana, of which he is a member. He is a Life Member of the National Rifle Association is one of that organizations’s certified firearms instructors.

See all of Joe’s knife styles at the upcoming Contemporary Longrifle Association Annual Show and Meeting, August 16 and 17,
2013 in the Grand Ballroom of the Lexington Convention Center, in Lexington, Kentucky.