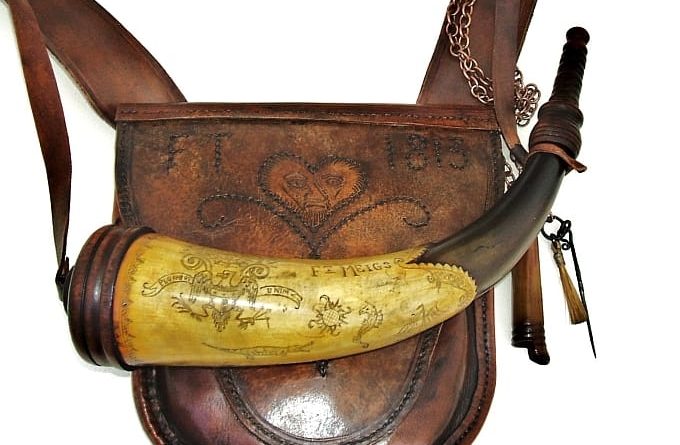 Another item specially made for the upcoming CLA auction is a detailed copy of the Francis Tansel Fort Meigs powder horn. Two very similar Ft. Meigs were made by Francis while he actually served at Ft. Meigs as a volunteer in Boswells 10th Kentucky Militia regiment, and it is believed that there once may even have been a third.

The special horn for this set, complete with its turned and applied walnut tip, fish mouth, and toothed engrailing was crafted by Tim Crosby. Then, using images of the original Tansel Fort Meigs horn as a pattern, the horn was engraved by T.CAlbert.

Next TC crafted an entire hand made pouch set including a carved bone breast plate, a chained vent pick and brush, and a small dagger and sheath attached to the strap. The horn measure was turned by Tim Crosby, and decoratrd by TC.

Assuming that perhaps Francis made the third horn for his own use, all of the items were carefully fashioned by the two Tims to represent what Tansel may have carried when he served as a volunteer militiaman at Fort Meigs, and all of these accoutrements have been personalized with his initials.

Francis and his sons, John, Timothy and Stark are widely known for their famous carved powder horns, engraved in what has fittingly become known as The Tansel style. That they eventually settled in the Indiana territory as farmers and hornsmiths is also common knowledge, but its not so well known that Francis himself was a veteran of The War of 1812. We can only speculate what the bulk of his war time experiences were, and how they influenced the recurring use of patriotic themes on the horns that he and his sons carved. This 2012 CLA Live Auction offering tries to bring a little bit of that experience back to life.